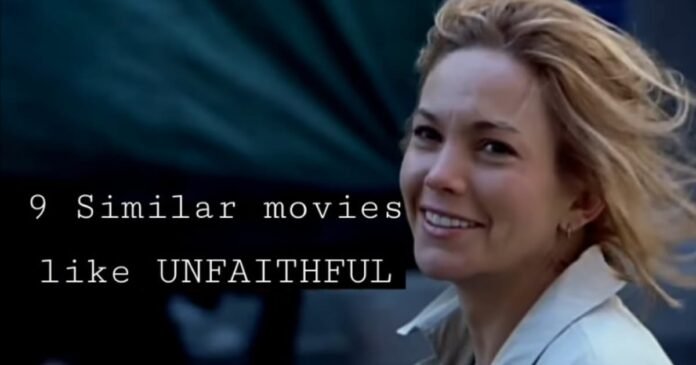 What according to you is the base of a relationship?
I guess trust and faith! In this world, people work for their survival, earn money, get into relationships, and live happily ever after. Life sorted! Isn’t it? No, it doesn’t work that way, we go through many ups and downs in life and one of them is infidelity and betrayal. Making sure of that, MovQue is going to serve you some similar movies like Unfaithful which will take on another journey of hopelessness and cruel encounters of your guilty pleasures. So, be ready for this next level of entertainment. Get ready and move forward to peep into the main content. Game on!

On that note, we have served an interesting list of similar movies like unfaithful which will certainly pull you together with their marvelous storylines. Isn’t it exciting?? Yes! Of course!! So, let give them a try and move forward towards the ruling content of the post.
Ready?
Let dive in!

This 2009 drama has a great story-line with good characters. It grabbed its audience by maintaining its thoughtful mood. The plot narrates the story about a couple Catherine and David Stewart are a self-sufficient pair living in the high society of Toronto but share an unhealthy relationship between themselves. Being into the music profession, Davids starts cheating with his students and Catherine is now fully aware of it. She recruits a prostitute named Chloe, for him to check the level of temptation he holds for other girls. Later, things run out of hands when Chloe starts explaining her hot and sizzling experiences. Chloe is considered to be the guilty pleasure of the highest level by its critics which moves from psychological drama to erotic world. If you loved unfaithful, Chloe is has a lot to serve on your plate!

This Anglo Irish movie of 2005 would be a good start if you are already done watching Unfaithful. The story of this film says about an extra-marital affair of the wife to her husband’s psychotic patient named Edgar. This chaos destroys the couple’s married life and gives lifetime scars that even time cannot heal. The fragile recovery of the wife is questioned when she meets Edger in an Asylum. The movie is based on Pat McCabe’s novel, which has an over-the-top chilling experience that matches its premise. The film manages to turn potentially interesting characters that got their own space and time two show their chemistry and acting competencies on screen. The movie is shot wonderfully at different beautiful locations and stays true to the book as per its promise, which is important. Asylum is a must-watch movie to feel an intense relationship turning dark!

Similar read: #10 Movies that will take you in the world of Friends With Benefits

This 2015 American psychological film is something different from the 1995 movie of the same name and same genre. The plot of this thriller cinematic piece tells us the story of a married couple named Justin (an attractive and smart personality) and Sabrina. Days later Sabrina finds out that her husband has a secret affair with a girl named Allie, who is unaware of the fact that Justin is married to Sabrina. Sooner, Sabrina asks her sister to help her in kidnapping Allie as a part of a prank. But what comes next is something more disturbing and disastrous.

The situation goes out of hand when the prank goes wrong and Allie fights for her life. Caught was shot in North Carolina, Los Angeles, and Boston the movie was appreciated for its good background story and cinematography. It is one of those movies, similar to Unfaithful, which will let you hold on to the characters and flows with the story.

This 2015 thriller drama is beyond what you think. With brilliant acting skills and unpredictable thoughts, Rendezvous has got all in it. The plot of this film tells us the story of a woman named Simone. She owns an old and shabby farmhouse in France and makes visits there with her husband named Eric along with two children. Simone has a dream to give this farmhouse a fresh new look by converting it into a hotel. As the chaos of reconstructing takes place, she gets trapped in a sexual romance with a contractor. She is off track from her targets but now supposed to get herself back on her dreams where it all started from. The end is quite loose but the entire journey is what makes you be in the movie from its first dialogue. Beautiful background score and execution. A must-watch movie of 2015.

The absolute romance drama of 2009, Leaving is a beautiful movie with a thick layer of erotica. The plot narrates the tale about a woman named Suzanne who is a bourgeois wife. She has been serving a great life for 20 good years to her husband and children but now wants to get back to work. Working as a physiotherapist, Suzanne has encountered something weird which has changed her life upside down. She finds herself getting involved and falling in love with a Spanish builder and running far away with him somewhere. Leaving is a warm, soft, and loving movie that holds the synopsis perfectly. The movie has been carried single-handedly by a woman, justifying her character wonderfully. It’s a cocktail of love you would surely enjoy and expect from a French cinematic piece.

You might also love: #7 Lovely Romantic Movies of Tom Cruise

He finds work on an old boat with the sailor Les Gault and his wife Ella. They share an erotic bond having many bed roles and nights full of lust and hotness. But one day, they find the corpse of a young lady floating at the surface of the water. Gradually the dead lady comes out as a past lover of Joe. However, the silence of Joe and Ella are saying out loud something which we are unaware of. Even the secret relationship between Joe and Elle has not been identified yet. According to critics, Young Adam is a grim, intelligent, and fiercely compelling film. So, don’t forget to watch this mystery erotica.

So, don’t forget to watch this mystery erotica.

A Walk on the Moon

Starring Diane Lane, Viggo Mortensen, Liev Schreiber, and Anna Paquin, this movie was highly acclaimed on the cast’s part. The story of this film twirls around Pearl Kantrowitz, who is an unfaithful housewife. She suffers from hardship as a candid event of the 1969 summer, reveals on her TV screen. Later, Walker Jerome, a handsome traveling salesman invites Pearl, in his calm and soothing living room.

There she recites the live broadcast of the iconic moon landing. That’s when it all happens; they start a lusty passionate relationship that warns her to save her marriage with her high school lover. But till then, Pearl is already in love with Jerome. The movie acquired a 75% rating from rotten tomatoes and 7 from IMDb. A walk on the moon was a well-executed package with some outstanding performances. It is one of those movies that is very similar to Unfaithful. So, sit and relax to watch this amazing 1999 drama film!

You might also love: The Tinder Swindler – Damocles’ sword, in the guise of a dating app, hangs over your head

An adaptation of a 1927 novel by John Thomas and Lady Jane, Lady Chatterley is a movie to admire than to adore. The synopsis of this French piece revolves around Lady Constance Chatterley who is young and very beautiful. She lives a lavish and comfortable life owned by her more than her age husband named Sir Clifford Chatterley. He has been in a wheelchair ever since has been severely injured in World War I. being extremely bored and uncomfortable with her unromantic marriage, Constance falls into a deep passionate emotional but controversial love fling with a gardener named Parkin who is a servent in their estate. According to critics, the movie is about the passion that invites its audience to stay tied up to the storyline. A sensitive love story you don’t wanna miss!

You might also love: 7 Movies similar to Notes on a Scandal that will blow your mind

Hollywood has given an outstanding series of movies and when it comes to infidelity there are a number of movies, similar to Unfaithful, that have done a remarkable job in their plot. Betrayal, disloyalty, distrust, unhealthy relationship are some of the fishes to the pond of this particular genre.

Keeping it alive all through, MovQue has come up with few similar movies like unfaithful that have made their own aura to gather a large amount of sensible audience. On that note, we are winding up this post. Do let us know your thoughts and views on the above-mentioned movies and don’t forget to visit MovQue regularly for such great content!
Cheers!

Trending today: 11 Similar Movies that will remind you of Fifty Shades of Grey