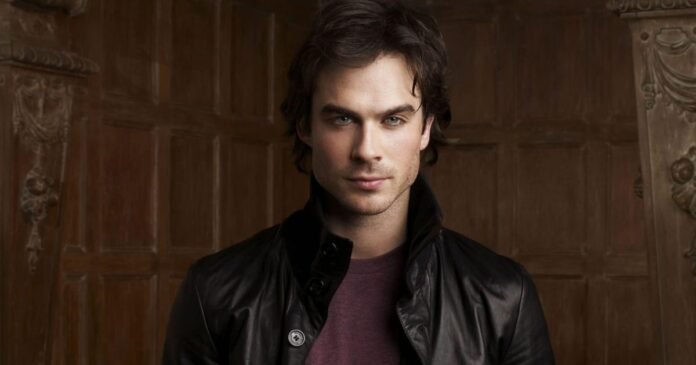 What qualities do you wish to see in your man? To be honest, choice and preferences may differ!
Every girl seeks her husband to be a sensible and perfect man who should be drop-dead gorgeous and quick-witted. But what if the standards are “just like Ian Somerhalder”. Too hard to fulfill, right? Well, we will definitely help you out but Ian Somerhalder…Uhhh…I doubt…Oh, C’mon ladies! After all, he is just one in a million.
Gathering it together, we are here to help you with this stunning post where you will discover some beautiful yet astonishing things you don’t know about Ian Somerhalder. MovQue is serving you few facts which a true fan must know. At the bottom, can’t keep calm, it’s about Ian Somerhalder!!!

Step Up for Good Cause

Starting with goodness for people and environment, your dearest actor owns a foundation of his name called IAN SOMERHALDER FOUNDATION. It works upon various programs and services and delivers public awareness on education, creatures, environment, youth, and Grassroots initiatives. The basic purpose of this perfect foundation is to advance science and to elevate the protection of natural resources like lands, forests, wildlife, and many other organic substantial tools. It is done for the betterment of the entire human and living community, helping the poor, distressed, and underdeveloped societies, etc. The foundation also supports other foundations by collaborating with them and conducting activities under section 501 (c) (3) of the Internal Revenue Code. Plants, animals, and humans play a unique role and are interdependent on each other. So, the challenges this foundation face needs a cohesive approach that doesn’t sacrifice one component over the other. ISF programs help in every aspect it could do to the society through programs, partnerships, media initiatives and campaigns, and a lot more. It provides support for organizational efforts that protect and restore the planet. Woah!! Marvelous. Well, we must say, indeed he is caring and outreached enough to save The Earth! What say gurlsss??

You might also love: Top 4 Damon-Centric Episodes of The Vampire Diaries

Oh, God! This, I bet a true fan might not be aware of, but Ian has a peculiar talent that many people don’t have. The thing that we are talking about is the writing ability of Ian Somerhalder. Oops! Rather I should correct myself, saying: the writing ability of Ian Somerhalder from his feet. Yes! You heard it right, he can write very beautifully from his feet. Can you do that?? I am sure; you can’t even imagine doing it! This is the only talent he picked up to be the master of in the initial days of his acting career. Is it possible? Yes, people do carry this talent. Like, some of you have the talent to write with left hand or both hands, similarly, some people can write miraculously with their feet. And magically, Ian Somerhalder is one of them. Well, this was truly amazing to know, isn’t it?

Similar read: 22 Similar Movies Like Don’t look up, Anything that makes you believe it may Happen in Real Life

Science in his Blood

Ian Somerhalder didn’t want to be “Damon” in his initial days. Just like every other person in this world, he too had a scientific dream to follow. So in order to achieve it, he dragged his studies in the same direction facing all the challenges and weaknesses. Later pulling him out of this and pursuing acting as his mainstream career. Isn’t it insane to think if Ian Somerhalder had not been into acting? Well, to be more specific he wanted to be a Marine Biologist, working underwater with sea creatures and experiencing aquatic life all by himself. Oh my god, beauty with brains. So basically, on one hand, he wanted to be in glamour while on the other, he wanted to chase his dream. Well, we are glad we got our Damon because of Ian’s sensible decision. Okay, let us move on to the next one.

How about your beloved celebrity owning his own fast-food chain, that too your favorite food, Pizza? Lord!! I will leave everything to have three times meal in his outlet! Well, to tell you Ian Somerhalder is carrying this trend out by opening his own café/Pizza. This space is located in Hailey, Idaho with the name of McClain’s Pizzeria which is filled with customers every time you walk in. The place is regulated by Ian, along with his siblings and family. Though Mr. Handsome Somerhalder is not a big fan of junkies, still he knows how to keep his fan and the public happy. So, it’s done! Whenever I am going to visit Idaho, McClain’s Pizzeria is one of the chosen hangout spots. And no, I won’t be sharing the last slice of Pizza with anyone. Rather enjoy eating it, gazing at Ian sitting right in front of my eyes!

Actors and celebrities know how, when and with whom to work. They don’t involve personal and professional life together. Rather keeping both of them confidential at a certain point. After all, work and personal life should have their own space to rule comfortably. The same goes with Ian Somerhalder who has been keeping a great distance between his professional and private life. He has and is being very clear-cut in his passion and targets. In respect of which, he often disagrees completely if he doesn’t like anything or appreciates it whenever he loves it.

During the shoot, on the sets of The Vampire Dairies, this cuddly sweet guy uses to change a few sentences or scenes from the script stating it straight to the creators. Also for the personal life, we saw him requesting to paparazzi to give him and Nikki Reed, his wife some privacy at the hotel they were staying for their Honeymoon in some country. Well, being transparent and clear in your words is not that bad, I guess! What do you say, ladies? 😉

Editor’s Pick: The Adam Project – Forces You to Confront Your Inner Child

Ian Somerhalder is a great star Hollywood has gained. He is fond of many such things which some of us don’t really know about like, as discussed earlier he loves nature and the environment and also likes to encounter underwater aquatic life. But you know what? He has a different hobby that he wants to carry throughout his life, i.e. directing and producing. Yes! This is what he is up to whenever he gets time. If you look down to the sources especially Wikipedia, you will definitely find Ian Somerhalder directing a number of episodes in The Vampire Diaries. Apart from this, he is also into writing beautiful pieces like stories, short films, episodes, sonnets, and many more. Deabakk!! Isn’t it eye-catching to imagine this sugar candy writing something in his black t-shirt! Well, I am waiting for him to write something about me! Fantasies you know!

Similar read: 10 Movies that will take you in the world of Friends With Benefits

Meditation is the Key

Ian Somerhalder is very punctual and well-systematic towards his life. He gives time to himself and his family. Shoots and Screenplays are not always his type, he takes out time to be with his loved one or write something as per his hobby. One of the beautiful things he enjoys doing is doing meditation and doing Yoga. Very different from his personality, right? Let me tell you more, he loves sports, be it football, badminton, cricket or any other game, he enjoys it to the fullest. But above all, workouts, meditation, and yoga are constant in his life. It helps him to clear his mind from hectic schedules and meetings. According to this attractive personality, it is the best way to get peace and solitude. Not only in hard times but it works magically in regular days of work. Well, you can’t find flaws in Somerhalder’s life. After all, he is a perfectionist, ladies!!

Many stars work together and forget till they get together into another movie once again. But some of them create a great bond after a movie. Working, shooting, acting, meeting together is all a part of a healthy relationship an actor holds. The same goes with Ian Somerhalder. He met Paul Wesley, a co-star from the show The Vampire Dairies who played the role of Stephen Salvatore, on the sets of the show.

Ian and Paul are friends since then. People often call their Bromance, due to their extraordinary relationship with each other. They are so close to each other that both of them together have come up with a brand name for their own whiskey chain called “Brother’s Bond”. The whisky is of the finest liquors to be sold in America. Well, how about taking a sip of this sweet and salty firewater drink? TBH, I am up for it!

An actor meets a number of people, including fans, every day. Wherever they go they are followed either by their fans or paparazzi. Obviously, they love each one of them who supports their acting, shows, and positive vision. Ian Somerhalder is one of these guys too. He is very rich in making friends but not every time. He is way different in picking and choosing his pals to hang out with or discuss the kind of things he wants to. Ian hardly has three to four friends till now whom he can really enjoy his favorite time. Similarly, if it is about dating a woman, he would not consider it much till the time he is not comfortable or interested in her. No matter how beautiful she is. Uhhh, don’t you think Ian Somerhalder is one such actor who carries an amazing personality and can inspire you to lead a more meaningful life than ever? That’s what I think, though!

Carrying great physic or appearance is not what all women desire; one must be golden at his heart. But, do you really think you are his biggest fan? Well, I doubt, because there might be some things you don’t know about Ian Somerhalder and his life. Isn’t it exciting to know about this hunky? Ultimately, Ian Somerhalder is the second name of hotness.
Alright, Guys, that was a bowl of secrets from our side. Now it’s your turn to let us know which of the above-mentioned points made you surprised. Also, comment down below about how the blog helped you. Finally, don’t forget to visit MovQue.com for such fabulous material!
Bubbayee!