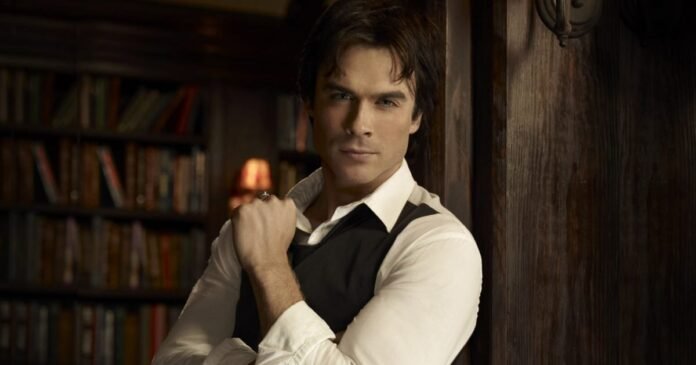 The Salvatore Brothers of The Vampire Diaries ruled the hearts of millions of viewers worldwide ever since it was released in 2009. Especially Damon, aka Ian Somerhalder. His sheer sexual appeal, dreamy eyes, snarky attitude, and panty-melting smirk – alone were enough to hook the viewers for 8 seasons. Add to the equation is his chemistry with Elena/Katherine, aka Nina Dobrev. 4 years after the show aired its final season, fans just can’t get enough of Damon. A dash of Damon Salvatore is not so bad, right? That’s why we compiled a list of the top 4 Damon-Centric Episodes of The Vampire Diaries for you. Read them now!

The Descent is one of the most popular Damon-centric episodes of all time. It focuses on Rose, Damon, and Elena. It is also the first time when Elena is alone with Damon in the Salvatore House. In the episode, Rose is getting sicker every passing minute due to the wolf bite. Damon feels helpless. He feeds her blood to soothe some of her pain. It temporarily helps her, but it’s no permanent cure. He entrusts Elena to take care of Rose while he goes out to find a remedy. He meets Jules in the Grill to ask her about any way to help Rose but comes back empty-handed when he finds out that the only way to reduce her pain is to kill her. Back at Salvatore House, a sick Rose hallucinates and confuses Elena for Katherine. She attacks her. When Damon returns, he stabs Rose in her chest with a wood and finally ends her pain, crying as he does it. Finally, Elena is alone with Damon and tries to comfort him, which becomes a moment. She hugs him, who finally admits that he doesn’t like to feel because feelings hurt.

Heart of Darkness is famous among Delena fans. In this episode, Stefan sends Elena for a road trip with Damon alone because he thinks Elena has unresolved feelings for Damon. He wants to ensure they’re on the same page before Elena and Stefan try to rekindle their own relationship. But during the trip, Delena takes refuge in a motel room, and things get steamy. A shirtless Damon nursing on alcohol as Elena watches him. Their staring war leads Damon to join Elena in the bed, where she brings up what he did for Rose to ask why he never shows the goodness in him. To that, he explains he doesn’t want to live up to anyone’s expectations. Sparks fly left and right, and they give in to their chemistry, and a steamy make-out scene starts. When Elena admits her confusion among the Salvatore brothers, Damon gets determined not to make it easy for her. He is prepared to fight for Elena. Whew! That was some hotness!

Weekend Watchlist 6: 5 Recommendations On What To Watch

Season 7 Episode 10: Hell Is Other People

In this episode, Damon is stuck inside Phoenix Stone, reliving one of his hardest memories during the civil war when he was still human and a lowly soldier. When he receives a letter from Stefan asking him to return home, he goes along with his pal Henry. But until he sees Lily, he doesn’t realize everything he is experiencing is not real. On the other hand, Bonny succeeds in bringing him back from Phoenix Stone before its effects take over and change him forever, only to realize Stefan is still stuck inside and his body has disappeared. Bonnie’s locator spell helps them find that Stefan’s body is will Julian. He keeps shuttling between his hell and reality. Utterly exhausted and perplexed, Damon breaks down when he realises he has truly lost his mother, Lily. When Stefan tries to comfort him, he attacks him, Bonnie, Caroline, and Matt and kills them all, only to realise this time it was real. He actually killed his loved ones.

Season 8 Episode 16: I Was Feeling Epic

Damon and Stefan fight their eternal enemy one last time. A long fight later, Stefan gives his brother the shot of vervain and resurrects him as human, which only means Stefan ages fast and dies, giving life to his brother. He reunites with his love and wife, Lexi. Bonnie uses her super witch power to wake Elena up. While returning, she bumps into Stefan, who explains what happened. Which means Stefan killed Katherine and let the hellfire take them both. We see Damon tracing his brother’s name on his tombstone. In the end, Damon and Elena both are human. They live a long, happy life. They get to grow old. In the end, we see Elena and Damon walking on the sidewalk. Elena suddenly sees her family, and we get to see a happy reunion as Damon also reunites with Stefan. Elena and Damon both get their own happy endings. Life is good, thanks to Stefan. Stream it on Netflix.

Do you like reading these Damon moments? Do you have your own list of favorite Damon-centric episodes? Let us know in the comments below. Until next time, Sayonara!