Free Guy: An Ode To Adventures Of Real And Virtual Life 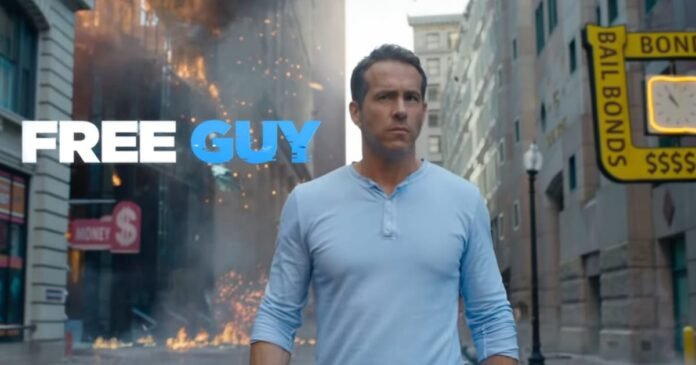 It’s a film for regular people! Guy meets his goldfish each day with a laugh. He then picks the very same clothing from the rack of similar clothes. Next, he gets his normal coffee with two sugars and heads to the bank to be robbed. Then there’s a bang! His entire existence has become a virtual game adventure in which he strives to get to be a hero. Also, Ryan Reynolds is in it, so that’s half the reason to watch free guy; We will reveal the other half further down.

Free Guy brings us the Guy (Ryan Reynolds), our nice local male who works as a bank teller. He lives a happy and healthy life in Free City amid the unrestrained madness around him. Completely oblivious that he’s playing in Free City, a game. He finds himself in a world where anybody donning sunglasses is a “hero”, and the law is “something of a hazy suggestion.”

The guy is content with his schedule and chatter with his friend Buddy (Lil Rel Howery). While playing Free Guy, he notices a true player known as Molotov Girl (Comer) and deviates from his norm. Pursuing the attractive woman down the main sidewalk. He’s one of those stupid dimwits who get simply blown away by the other gamers as they roam around.

As he grows keener in Molotov Girl and where she could be going, he obtains a pair of sunglasses. These unveil what the real players see in one such world. This world includes quests, medikits, centers, as well as other items. All of this is familiar to modern video game players, even though some of the technology here is already dated. The man begins to understand the game rules. He had no idea he was playing. He’s surprisingly adept at it, thanks to a mixture of chirpy love to Millie. She offers her unique motivations for returning every day, and the beauty of nature.

As the world attempts to find out who this mystery player could be, The Guy picks just the positive objectives in the game. He becomes an internet celebrity, unaware that he is perhaps the most astounding advance in artificial intelligence in all. Millie and Keys try to preserve real progress from aggressive capitalism by uncovering what has already been produced here.

The goofiness is charming

You might argue that Free Guy is all about the videogame industry, which is what it is. It has few things to say about it, except that individuals are terrible online. The person behind such a heavily muscled motorcycle character will be most certainly be a 10-year-old kid or a dimwit residing in his mother’s basement. It’s based on the high-concept idea of a non-playable figure going through an emotional problem, but it’s simply there to give your usual, steroidal extravaganza.

The amazing action, gamer-vlogger appearances, as well as the fact that there are many more Easter eggs than an easter bunny hunt will interest kids and enthusiasts alike. The film sincerely wishes to be your buddy. It’s simple to like and enjoyable to be out with. Unfortunately, it also has a knack for going round in circles, breaking attention, and puking on the ground. There are a lot of memes and references in Free Guy.

There are callbacks to classics like Dead Space and some obvious commercial advertising only for an eagle-eyed audience, but there are elements for the less educated. However, the film’s appeal is far broader. Free Guy likewise teaches the value of uniqueness. Through thinking like a hundred other films and by physically integrating some of their visuals. There are conceptual connections with ranging movies like The Lego Movie to The Matrix. But what makes it fascinating is its frank sweetness and silly delight.

Similar read: The power of the dog: Nothing more than for the mother’s happiness

In Shawn Levy’s shamelessly charming sci-fi humour with high quality, goofy Ryan Reynolds and uber-cool Jodie Comer team up. Living in the real world, we discover that Molotov Girl is Millie, a programmer who worked with Keys, another software mastermind. Jodie Comer strikes the perfect balance of socially awkward coldness and total seduction. Ryan Reynolds’ subtle comedic skills are one of the franchise’s most enjoyable surprises.

The 45-year-old performer is a magician, capable of transforming an underlying feeling of arrogant nonsense into an overpowering sensation of charm, in-joke participation, and cinematic allure. At the very least, this film serves as a reminder that nothing about life is totally free. You’re just spending on things in manners you will or will not be aware of.

Several amusing moments are present in the first half, including a wonderful sequence of Guy’s “good” missions. In addition, there is a humorous scenario wherein Keys and his programmer colleague Mouser (Utkarsh Ambudkar) go after Guy, do an outstanding job of keeping “Free Guy” clicking and humming. Whenever “Free Guy” begins to become mind-numbingly repetitive, a choice made by writers Matt Lieberman and Zak Penn, or by Comer or Reynolds, pulls it back into the limelight.

Weekend Watch-list: 5 Recommendations On What To Watch this week

Free Guy: See it or Skip it?

It really would be tempting to reduce this film to a basic narrative. About non-player characters (NPCs) coming to terms with the fact that they are supporting characters in a pre-written plot. However, if you’re a gamer or otherwise, you’ll grin when Millie asks Guy if that Glock inside his pocket is a Glock. Right before actually thrusting her fist down his armory and pulling out two gleaming metal sidearms. The film is held together by a likeable ensemble, particularly Jodie Comer’s movie-stealing performance. However, there are still some flaws in this structure to make one desire it was finer. First, it’s a playful parody that makes fun of everyone. Second, it’s a heartfelt message to gamers. Simply defined, if you’ve really cherished playing a video game, you must see this film.