The power of the dog: Nothing more than for the mother’s happiness 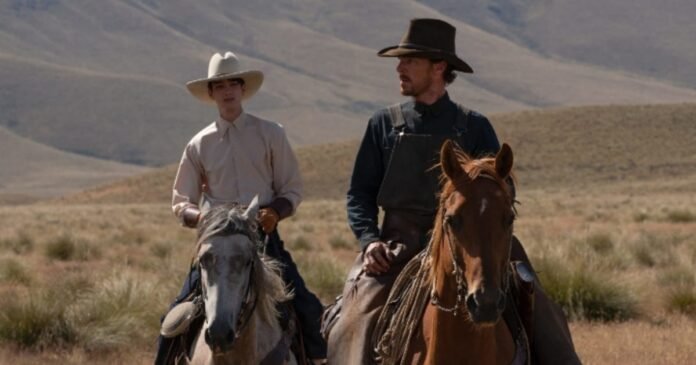 To what extend will you go for the happiness of your mother? To murder a man, would you? Are you that strong? Ask for yourself… if you say that ‘I am strong’, let me explain you something ‘strong’ doesn’t define the physical strength of a man, it’s the power of the mind. How do you feel now, are you still feeling strong…? If yes, then you are strong enough for The power of the dog…

The power of the dog is directed by Jane Campion, the first female film director to receive the award Palme d’Or. Campion’s work is always described as the fullest and truest way of being faithful to the reality of experience, by utilizing the ‘unsayable’ and ‘unseeable’. She manages to catalyze the audience speculations. The movie is adapted from the novel ‘The power of the dog’ (1967), a notable work of Thomas Savage, an American author. Savages childhood experiences reflected in many of his novels. The same way ‘The power of the dog’ also have the shades of his life.

Now let’s check that person who wants to captivate the mind of audience.

The Power of the Dog: Plot overview

‘When my father passed, I wanted nothing more than my mother’s happiness. For what kind of a man would I be, if I did not help my mother? If I did not save her?’-This is the voice over when the movie begins. The answer to this voice-over is the end note of the movie.

The Burbank brothers Phil and George are wealthy ranchers in Montana. The brothers are temperamentally quite different,with George being milder, kinder and gentler while Phil even though abrasive, has the admiration of all the ranch hands. Next we will be moved to Peter, a frail- looking young man sitting alone in his room painstakingly crafting paper flowers that will be placed as table centerpieces in the restaurant inn that his mother owns.

Later those flowers will turn into ash burned by bullying cattle rancher Phil. Rose, is a widowed proprietress, survived by her effeminate son Peter. Phil behaves so cruelly he drives Rose to tears. The kind hearted George marries Rose and the domineering rancher responds with mocking cruelty when his brother brings home his new wife.
Phil’s rough ways and taunting manner unnerves Rose. George organizes a dinner party with his parents and the governor, so they can meet Rose and hear her play their new piano. Rose is unable to play more than a few notes and is further humiliated when Phil belittles her. As the guests leaves, she takes a drink of alcohol.

Latest News: Christopher Nolan to make the next film with Universal Studios?

By the time Peter comes to stay at the ranch for the summer break, Rose has become an alcoholic. Phil and his men taunt Peter, and he sequesters himself in his room dissecting animals and studying diseases. In a secluded glade, Phil masturbates with Bronco Henry’s handkerchief. Peter enters the glade and finds a stash of magazines with Bronco Henry’s name on them depicting nude men. He observes Phil bathing in a pond with the handkerchief around his neck, Phil notices him and chases him off.

Bronco Henry is an unknown character only mentioned in the movie by the words of Phil. Bronco is the mentor and friend of Phil.

Sometime later Phil begins to show decency to Peter. He teaches him how to ride the horse. After learning to ride Peter heads out on his own one day and finds a dead cow, presumably dead from anthrax infection. He puts on gloves and cuts pieces of cows hides. In the midway of the movie Peter was asking doubts about cattle disease. Why he is asking about Anthrax? What he is up to? Wait and see.

The power is just not the body, its mind and intelligence a human carry in his life.
While killing a rabbit, Phil Gets an open wound on his hand. Afterwards Peter tells Phil about finding the body of his father who had hanged and cutting him down himself . Peter says I am strong.. but Phil laughs and taunts him hearing that he is strong. Here we can see the power and strength of Peter in his eyes.

Rose’s alcoholism worsens. Rose defiantly gives traders the hides without asking Phil. Traders thank her with a pair of gloves which she found that her late husbands gloves. She then collapses.

Knowing that there is no hides to finish Peters ropes. Phil was angry and stopped by Peter by offering the hides he cut out from the diseased animal. They spend the night in the barn finishing the rope. Phil tells Peter a story of how Bronco Henry saved his life lying body to body with him in a bedroll during freezing weather. Phil does not show up when peter asked if ,they were naked..

Next morning when Phil does not show up for breakfast, George finds him sickened in bed and his wound is heavily infected. He was taken to hospital. In the next scene, George is taking the coffin and Phil s body is prepared for burial. At the funeral, doctor informs George that he is died from Anthrax. George was unable to believe that, because Phil always avoided diseased animals and then How?

The climax makes us realize , for the sake of his mothers happiness Peter planned to finish off Phil. Peter reads Bible…keeps the finished lasso under his bed , walks near the window and watches George and Rose embraces, he turns away and smile…..

The Power of the Dog Cast: Emotionally in-depth characters

The power of the dog revolves around 4 characters: Benedict Cumberbatch as Phil Burbank, Kirsten Dunst as Rose Gordon, Jesse Plemons as George Burbank, and Kodi Smit- Mc Phee as Peter Gordon. The characters emotional outburst is clearly visualized in the movie.

The domineering ranger Phil’s rough ways and taunting manner with the hiding homoeroticism is picturized. The audience can connect in a way that the physical inbuilt is not the actual strength of a man. Phil feels proud about himself when seeing the barking dog in the faraway mountain were other cowhands fails to see. But in a scene the frail effeminate Peter says he can see the barking dog, the close facial expression of Phil shows in the way..that how come he, its my power, my mentor Bronco Henry taught is relatable .

The widow Rose Gordon, the mother of Peter was struggling to meet the bread and wine by running an inn. The misbehavior of Phil towards her son made her cry so hardly, that George decided to marry her. There begins the total emotional outbreak of all the 4 characters.

You might also love: 9 Things you don’t know about Ian Somerhalder

The movie is a World premiere at the 78th Venice International film festival and director Jane Campion won the silver lion for the best direction. The Power of the Dog was released to stream worldwide on Netflix on December , 2021. Named one of the best films of 2021 by American Film Institute. Received 7 nominations at 79th Golden Globe Awards, including best Motion picture- drama. 10 nominations at the 27th Critis hoice awards including best picture.

The power of the dog: Review

The Power of the dog is a Western drama film. The movie happens in Montana in the year 1923. The font of the title and color of the movie shows up, as if we are flipping a Novel book. The movie has three parts — Part1, 2 and 3. Special applause should be given for the sound department. The keen observation of sound, small noise of sighs, even the sound of the bed when moved is perfectly blended.

Jame Campion as a director gave keen attention in the detailing and deliberately built the tension around the story.

Phil and Peter is the backbone of the movie. The outstanding performance of Benedict as Phil, a physically build man but whose mind is diseased, who hides some secretes as if keeps animals hides in the shelter for making rope or lasso. Homosexuality or homoeroticism of Phil is convincing by his act .

Kodi Smit- Mc Phee as Peter with beguiling and full bodied performance. As easiness as he crafts the paperflowers , Peter plans to finish off Phil, by perfectly studying the hidden character. Whatever taunting or bullying he faced , Peter was focused in his aim. He wanted nothing more than the happiness of his mother.

After reading this review, I think you realized, what is the real power? What waiting for …don’t waste the time go and watch the most acclaimed movie of the year 2021…..