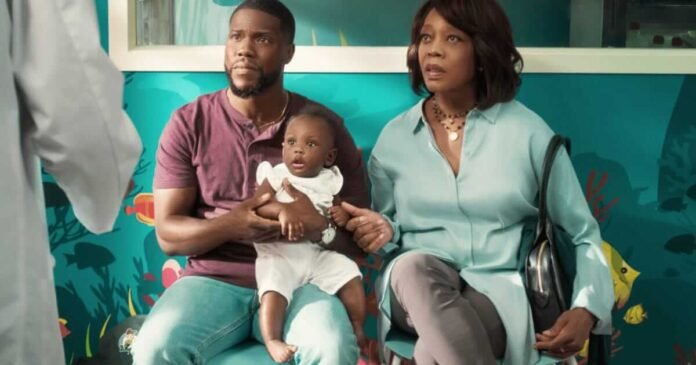 Liked fatherhood? On the lookout for similar movies like Fatherhood? Here is it.

Kevin Hart and Melody Hurd won the hearts of millions of people across the world as Matt, a recently widowed single dad, and Maddy, as Matt’s newborn baby girl in Netflix’s movie Fatherhood. The streaming company revealed that within two weeks of release, Fatherhood has been watched in 61 million households across the globe.

Fans haven’t been able to stop praising this movie about how a single dad manages to raise her daughter single-handedly after his wife’s death despite protests from his mother, mother-in-law, and everyone around him. While Matt’s struggle to change Maddy’s diaper, make her fall asleep, to manage home and office and many other scenes will make you laugh, it will make you cry your eyes out as well. Have you read our review of Fatherhood yet? If not, read it here.

So, if you are one of those 61 million fans of ‘Fatherhood’, you would love these 6 movies about single parenthood and father-kid relationship as well. Take a look at this list. You can find most of these movies on Netflix, Amazon Prime, and Hulu.

Directed by Academy Award-winning director Alexander Payne, tragicomedy drama The Descendants follows George Clooney as Matt King, an uptight lawyer and real-estate owner based in Hawaii, and his teenage daughter Alexandra and younger Scottie. Their life came crashing to a halt when their mother and Matt’s wife Elizabeth met a boat accident, leaving her in a comatose state. Their tranquil life gets even more complicated when Alexandra reveals that their mom was having an illicit affair with her father. The Descendants is a refreshing exploration of love, life, relationship, and overall, parenting. If you loved Fatherhood, then this underrated family drama will enchant you as well. Stream it on YouTube.

If you are not afraid of venturing into Asian movies, try After The Storm. Japanese filmmaker Hirokazu Kore-Eda in After the Storm turns his camera into a window, where on the other side we find people like us.

This story is about a writer-turned private investigator Ryota, who is unable to live in his present. He longs for what he’s lost or dreams couldn’t achieve yet. And it’s destroying him. Devastated by his father’s death, this failure of a man, Ryota becomes obsessed with his ex-wife and her new beau. He fights to get the attention of his son, Shingo. One night, during a typhoon, Ryota gets stuck in his mother’s apartment with Shingo and his ex-wife. There are no grand revelations or emotional breakdowns, just some heartfelt conversations. But still, the sunlight looks a bit different for them the next day. After The Storm is a bittersweet drama that leaves a lingering effect on viewer’s minds. It is one of the few very movies that has the same kind of father-daughter relationship like Fatherhood. Stream it on Amazon Prime now.

Written and directed by Adam Brooks, Definitely, Maybe, is a heart-warming romantic comedy, starring Ryan Reynolds. The movie is based on the plot of ‘How I Met Your Mother’ but twisted it in an extremely endearing way. The film follows Will, a successful advertising executive, on the brink of his divorce is interrogated by his 10-year-old daughter about how he met her mother and all his past girlfriends. So, Will decides to venture into his past, but the rule is all the names of his lovers are changed and his daughter has to guess who her mom is. Definitely, Maybe is an honest and authentic film that is sprinkled with hopefulness spread throughout. Stream it on YouTube.

Little Miss Sunshine, the smashing directorial debut of Jonathan Dayton and Valerie Faris, is an ode to a classic dysfunctional American family. After winning a beauty contest, Little Miss Sunshine, in Albuquerque, 7-year-old, Olive, and the rest of her family (father, Richard, mother, Sheryl, brother, Dwayne, grandpa, Edwin, and uncle Frank) decide to go to California to take part in the next stage of the contest. So, they embark on a memorable 700-miles-long journey in their VW van. But the journey is as complicated and entertaining as their family is. Do they finally reach their destination? If you loved the bittersweet note of Fatherhood, you’ll also love Little Miss Sunshine. Available on YouTube.

I am Sam – this 2001 movie starring Sean Penn, Dakota Fanning, and Michelle Pfeiffer, is an American drama that is guaranteed to win you over. You have no idea what you have been missing out on if you haven’t watched this Oscar nominated movie. The narration follows Sam, a mentally handicapped man, who fights for the custody of his 7-year-old daughter, Lucy.

He has to prove himself in front of the judge and jury that despite his disability, he can raise his daughter. When he almost lost all hopes, a high-velocity Beverly Hills lawyer named Rita takes Sam’s case on a pro bono basis to prove to her colleagues that she’s not a selfish bitch. Wrapped in comedy, I am Sam is a heart-warming movie that will definitely make you cry. If you loved the chemistry between Matt and Maddy from Fatherhood and want more of it from similar movies, you’ll absolutely love Sam and Lucy. Stream it on Netflix.

Miracle in Cell No. 7

Miracle in Cell No. 7 is Korean comedy drama. The bittersweet story of a mentally challenged father, Yong-Goo, and his daughter, Ye-Seung, won hearts of the entire world. It has been remade in Turkish as well with the same name. Miracle in Cell No. 7 follows Yong-Goo, who is wrongly accused for kidnapping and murder and sentenced for capital punishment. In jail, he is in cell number 7.

One day, when Yong-Goo saved the life of his cellmate So Yang-Ho from a rival prison gang leader, he offered to help Yong-Goo in any way possible to return the favor. So, Yong-Goo told his cellmates he misses his daughter very much and wants to see his daughter. That’s how Yong-Goo’s five inmates start to plan to make this miracle happen. Similar to Fatherhood, the emotional string between differently-abled Yong-Goo and his daughter, Ye-Seung will definitely make you cry your heart out. Stream it on Amazon Prime.

Have you enjoyed reading this list? Which of these movies like Fatherhood are you going to watch first? Let us know how you liked them in the comments below. Until next time, Sayonara!