A Quiet Place that made everyone in the theatre shout

This nerve-wracking movie gives you shudders, and that is a sweet, sweet pain. This no-nonsense horror movie is the kind of thriller that lives up to its name. Giving the thrills and chills at just the right moments. The American horror film, Quiet Place came out in 2018, directed beautifully by John Krasinski.

This critically acclaimed film drew its inspiration from “Alien, No Country for Old Men”, “In the Bedroom”.

The movie plays on our insecurity and fear of not being able to express ourselves and builds itself.

The movie begins by showing that the world is taken over by special kind of monsters at present. The ones attracted to noise and even the slightest sound, which makes them attack anything that dares make a sound in front of them. The story follows the point of view of The Abbott family, who manage to survive by staying extremely quiet.

They have three children, their eldest who is deaf, which helps them in the long run. They are well-versed in sign language and can communicate fluently with each other. The parents are extremely practical and smart, building a haven for themselves with proper food, surveillance, warning lights. Also entertainment with a silent monopoly game.

Regan, their eldest daughter, is caught up in her demons, reliving the worst nightmare of her life, blaming herself for her brother’s death. Marcus is not ready to leave their home and risk his life. Their situation worsens when Evelyn(the mother) goes into labour when no one is home and has to deliver her baby in silence, but fate doesn’t seem too keen to grant her that; she finds herself almost ready to deliver her baby alone, monsters circling.

This brilliant, suspenseful thriller based in the post-apocalyptic world makes you gibber anxiously, always on tenterhooks; the whole movie shows how this post-apocalyptic wasteland is rid of all that made it beautiful, the innocence of childhood and the happiness in life, and the cries of joyful living. This movie makes you wonder if, over the years, this happened, will we be able to survive? Will we adapt? Will this become a new normal?

It makes you think of how fear makes you do things you never thought you could do. It shows how humans can internalize fear and remain silent, just how when you are in rain forests, you change your habits to keep yourself safe, making even the most bizarre thought feel workable and natural.

What is the significance of Evelyn’s birthing? 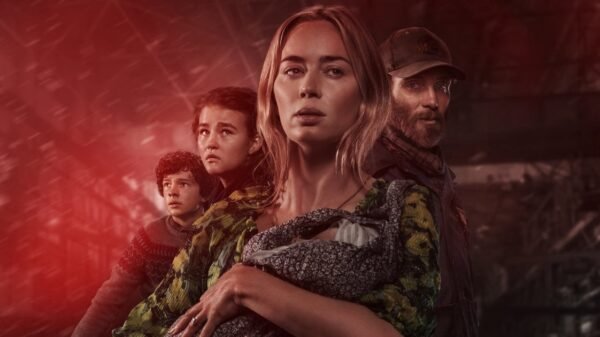 When Evelyn is giving birth and the monsters circle around her, she naturally would have shrieked in pain and fear, but the threat of death made her stay silent. When the children lost their father, Lee, when he was trying to save them, the pain they must have felt would have been unbearable. But to adapt and save themselves, they couldn’t howl in anguish; they couldn’t shout out in pain they were feeling. This makes us think, it is our nature to yearn for what we cannot have. so when we see the movie, we see how even after mentally training yourself to stay silent, the suppressing of noise makes you covet doing just that.

It makes you ache not just for making noise to survive but to let out a wail of anguish, cry out in despair. Scream and yowl at the horror of what you are seeing, what the world has come to. And to live your life this way indefinitely is anything but normal.

The simplicity in direction and acting adds to its beauty and thrill. Unlike present-day thrillers, this movie did not rely on the grotesqueness of the monster; the movie plays on the fear of anticipation of death. The fear that is overwhelming each person on the screen instead. And if the actors were not as compelling, this movie would have looked too ridiculous in the direst of situations.

It has no script, but a great screenplay!

A movie with no dialogues and still manages to leave such an impact is what we could have wished for. The undercurrent of shuddering tension in every scene, the anticipation and uncertainty of a grisly demise with the slightest of sounds, leaving no room for error. The characters are not just some scared people. All the people in the movie have other problems as well, bearing on them, making them relatable to the viewer. Even if they are in a world unlike our own and face a threat that we wish we never do.

This movie is a horror, no doubt, but it also merges into something derivative and incredibly unique. It focuses not only on the horror and the thrill, but it also gives you a taste of domestic drama from a lack of communication, parental anxieties, and teen rage. This is a movie that gives you all you want. whether you look for a thriller, a solid plot with an actual story line to follow. Available on Amazon.

Not everything in this movie may make sense to you. But the less you think and the more you watch, the better it gets. The way it is based on a world that is not much different to ours in some ways but is poles apart in others, the world-building in the movie is impressive. With the noise=death equation, it as much simplifies the story as it complicates it. It is a movie that makes you want to suspend all your beliefs, leave your reasoning outside the door and enjoy. The film is disarmingly emotional and thrilling, and shock your sense beyond comparison.

A Quiet Place gives you food for thought, makes you think of the strangest thoughts, and makes you wonder just how noisy we are! The humming of nervous energy with an undercurrent of fear in each scene makes you sit up and take notice. It is for sure a triumphant combination of thrill, suspense, horror, and a hint of domestic drama. This makes the plot more believable and the characters feel more human.

How does A Quiet Place end?

When Reagan discovers how the monsters were weakened by her hearing aid and there was hope to kill them, it was a triumph. However, it was filled with just as much pain as Lee’s death. The end of the movie is happy but painful as well.

It is a film seething with anxiety and brutality that leaves you speechless; the natural simplicity of the ‘A  Quiet Place’ is what really makes it beautiful and unique. The scenes are brutal yet real enough to elicit screeches of horror and anguish from the audience. Much to the satisfaction of the people who worked so hard for this film to become a success. It is gripping, clever, and a rare occurrence, hence highly recommended to those who have not a faint heart.