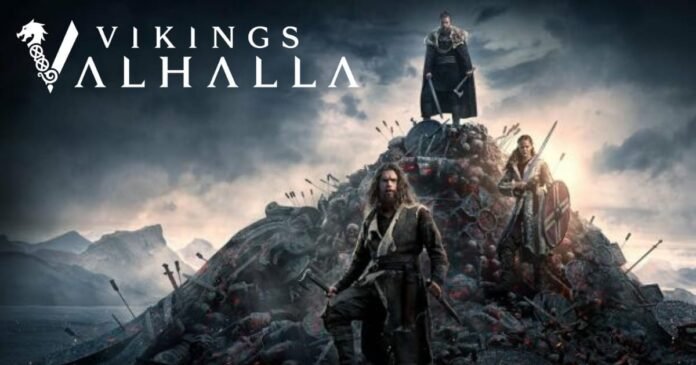 Vikings: Vahalla is a film with colorful cinematic visuals that tells the story of real Vikings.

Warriors walk out of history and say, “Hey, nothing has changed in this world.” People’s perspectives appear to be similar to ours… Only bricks and blocks… The sword has been replaced by missile guns, and tankers have taken over the role of horses… The centuries-old saga of religious conflicts continues to bind the knot in the twenty-first century. Who will decide on our worship? Beyond ultramodern developments, why do conflicts erupt in every part of the world? Believes that it should be one’s own choice…

Vikings: Valhalla is a follow-up series to the historical drama television series Vikings.
Real historic Vikings are portrayed, and the film has a mysticism vibe to it, while also confronting the differences between pagan and Christian Vikings.

Let us put ourselves in the shoes of historical figures.

History is more real than today’s life…now we hear the cries of small little kids to great grand olds…what is the problem do you have thought…fight for the land what is happening in Ukraine….what that’s happened to Vikings more similar to the present…fighting for the people and fighting for the land Danelaw Vikings… The English wanted them exterminated… completely cleared….as the Vikings: Valhalla speaks. During the 9th to 11th centuries, the Vikings were raiders, pirates, traders, explorers, and colonizers. They frequently sailed from Scandinavia to take control of areas of Europe and beyond.

Vikings are the modern term for seafaring people who raided, pirated, traded and settled throughout Europe. Vikings are based on the sagas of Ragnar Lothbrok, one of the most well-known legendary Norse heroes and a scourge of Anglo-Saxon England and West Francia. Almost all of the characters in Vikings: Valhalla is based on real people. Vikings: Valhalla focused on the conflict between pagans and Christians, but the Vikings came into contact with Christianity through their raids, so this era in Scandinavia was also a period of religious change. Although it is widely assumed that pagan Vikings despised Christians, historians believe that attacks on Christian churches were unrelated to their differing religious beliefs.

Jeb Stuart, best known for his work on Die Hard and The Fugitive, created the Viking’s sequel with Venessa Alexander, who began her career writing stage plays in New Zealand. Several of her plays have been praised.
Michael Hirst created the first season of Vikings, which aired on the History Channel in 2013. Despite being intended as a miniseries, Vikings lasted six seasons and ended in 2019, but the stories from the Viking Age continue in Vikings: Valhalla.

The audience will be transported to a centuries-old land while watching Vikings’ Valhalla. Eight episodes will take you through the history sequences. Vikings: Valhalla season 1 follows Leif Erikson, Freyds Eirksdóttir, and Harald Sigurdsson on a journey across oceans and battlefields, with the conflict between Vikings and English royals serving as a backdrop. Pagans and Christians are at odds.

Revenge is being exacted for the sake of honor, with a fight against the English. Vikings are divided by religious practices, with some adopting Christianity and others adhering to the old uncivilized religious practices of the Pagans. Both of them became enemies, making it easy for the English to attack the Vikings. a close-knit family steeped in pagan beliefs a staunch believer in the ‘old gods’

There is a saying that generations will be affected by the sins we commit, and this is true for Leif Eriksson, who is haunted by the sins of his notorious father Erik the Red. The young Greenlander is fighting for his sister Vengeance’s life. According to history, Leif Erikson is the most famous Viking explorer, establishing the first European settlement in a land he called Vinland, which historians believe is Canada. Leif Erikson, also known as Leif the Lucky, was a Norse explorer who is thought to have been the first European to set foot on continental North America before Christopher Columbus.

Editor’s pick: Shadow and Bone vs. GOT, Are they so different?

In real life, Harald was commonly referred to as Harald Hardrada, which essentially meant “the hard ruler.” He is a man who has always wanted to be a king. The part was played by Leo Suter. Harald is a Christian Viking, but that doesn’t stop him from becoming close to Freyds and forming a brother-relationship with Leif.

Politically astute and ambitious ruler, he sees and reads the people when others do not. Bradley Freegard is cast in the role. In retaliation for the murder of Vikings, he leads an invasion of England.

Godwin is the “the ultimate survivor,” and he served under King Canute and his successors.

Godwin rose to prominence as a result of his association with Canute and the political landscape that Godwin was capable of bending to his desires. Godwin will play a significant role in Vikings: Valhalla due to his deceptive actions and the consequences of those actions on other Valhalla characters, including Emma of Normandy.

The Seer frequently offered advice to various members of the Lothbrok family, revealing frustratingly vague but promising tidbits about their fate.

A 200-year-old blind being who frequently provides the characters with mysterious predictions. Throughout the original series’ six seasons, John Kavanagh appeared as The Seer.

Similar read: 13 Movies about Loneliness that will hold your heart

Not the only way for them to purify the field was to exterminate all Vikings.
Over a century ago, a Viking army set out to England to avenge Ragnar Lothbrok’s death, and they succeeded. Following numerous great victories, Vikings settle into communities in Danelaw, which became their home. A year ago, a massacre began, not between warriors, but against innocent women and children.

Believe, it differs for each person, some may go to church or holy place regularly, others may not, they meditate to themselves, it depends on each person’s belief, but the sad thing is that this has not changed yet what? The fight for religion, and the fight against belief, continues until and unless we decide that we all have the same colored blood. Pagans who were losing the fight wanted God to help them…so they committed an inhuman act by sacrificing one of the Vikings, Audun, who gladly came forward to accept responsibility for the act.

Similar read: 5 Best Political TV Shows you should watch in your lifetime

You are familiar with all female characters such as Freydis Eirksdóttir, Queen Emma of Normandy, and Haakon Ericsson. As a woman, I feel like I’m raising my head because I’m proud to see women who make decisions with pride. It’s humbling to know that such people exist in our world. Throughout history, powerful women and their stories have existed. History demonstrates that women, like men, were warriors, while a question arises in my mind? Whether our world is progressing toward modernity or not….. women could own property and rule kingdoms… Frida Gustavsson and Caroline Henderson play Freydis and Jarl to play such strong, commanding female roles in the Netflix series Vikings: Valhalla.

Freydis is Leif Erikson’s fierce sister, portrayed as an ambitious warrior. She travels to Kattegat to assassinate the Christian Viking who sexually assaulted and tortured her when she was a child. Fight like a man. In real life, she valiantly fights American warriors while pregnant. Frida Gustavsson played the part. The Vikings are commonly referred to as barbarians, but Freydis, who was raised by a Viking leader, enjoys rights that were not available to all women at the time. Freyd’s actions serve to teach a lesson about the dangers of violence and selfishness.

Pretty much good in reaching the audience even if you haven’t watched the first season of Vikings, you will be able to understand what the creators of want to convey. It’s super fast and packed with awesome fight sequences. The action sequences are so captivating. It’s a must-watch for history lovers.