The Salvatore Brothers are Back, With A Smooth & Smoking- Bourbon 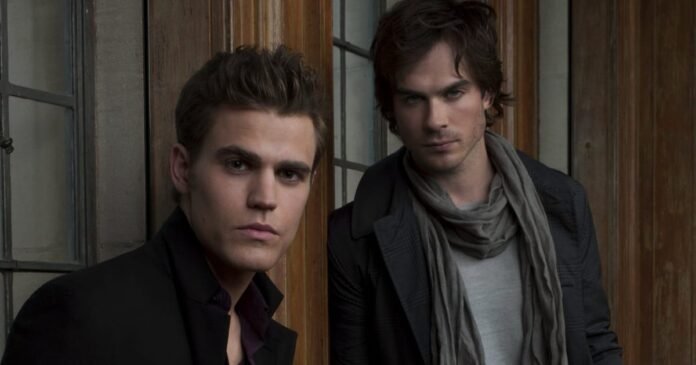 Has it been 12 years already since ‘The Vampire Diaries’ premiered? Time surely flies by.
Ian Somerhalder and Paul Wesley played the role of Salvatore brothers for eight seasons in the show until 2017, when they bid adieu to it. Now, the duo has a new passion project. And they named it ‘Brothers Bond’. What an icon.
Before they dived into this new venture, these on-screen brothers captured the audience’s heart through their show which dealt with love triangles with a high school girl named Elena Gilbert, played by Nina Dobrev. Fans watched the vampire diaries in anticipation of who she would end up with.

The Salvatore Brothers: Their history together

Wesley had many shades in his character, Stefan, and over the years, his characters oscillated back and forth between being ‘the good guy, and a bloodthirsty, dangerous version of himself. He called that dangerous version ‘the ripper’. “I was always the good guy. And so I was a little bit envious, frankly. So when my character took a turn and became the bad guy, the ripper, that for me as you know, I was super excited to do something different.”

Ian played the character of Damon Salvatore. He considers that role on ‘The Vampire Diaries’ as the job of a lifetime. He recalled about the time he realized that he was a part of a blockbuster show. “We were trying to leave the hotel. And there were, like, 1,000 people on either side of this little hotel where we used to stay all the time. And we had to go through secret entrances, and we had multiple cars. Two dummy cars, one we were in, one we weren’t. One for full security and the guy at the time who’s the head of Warner Brothers International just said, ‘The only time I’ve seen this, like, this was the launch of ‘Beverly Hills, 90210,’ believe it or not.”

Brothers on and off-screen.

Generally, we see co-stars getting romantically involved with each other on the sets. But here, Ian and Wesley formed a tight bond, like brothers. Wesley insisted that there was another key relationship on the show aside from the romantic ones. “I think the relationship between the brothers was the most important one.”
Ian reminisced, “We spent a lot of beautiful, perfect summer Georgia evenings. You know, just sort of, like, sitting there together just running lines. I remember we moved in next to each other in season one. We had apartments next to each other.”

You might also love: 9 Things you don’t know about Ian Somerhalder

Where did the idea come from?

Their characters, the Salvatore brothers, loved the taste of Bourbon. And this harmonized nicely with the actors’ own love for this. A Louisiana native, Somerhalder recalls, “For me, bourbon was about culture”. And though Wesley was born in New Jersey, he started appreciating the Bourbon.

The idea for their bourbon company originated out of those days in Georgia when both of them spent a lot of time together, drinking Bourbon on and off-screen. “The number of times and the number of screen-grabs I have of Stefan and Damon bonding over a bourbon…and, you know, it’s so cool to be able to, like, re-create that in a sense, you know? So this is our reunion,” said Wesley.

Ian first announced this exciting news on Instagram in September 2020. “Can you imagine if the Salvatore brothers had their OWN bourbon?” he wrote. “Well, it’s coming! @paulwesley and I have been working our asses off with our incredible team to make this happen.” Then, the actor directly addressed the devoted Vampire Diaries fan base, adding, “You’ve given us so many wonderful years as these characters, and we want to bring you something to enjoy that brings back some great memories and some good times to come!”

Good for the world too!

The actors also added that ‘Brother’s Bond’ will be contributing to the communities. A portion of their sales would go towards regenerative farming practices, a cause both Ian and Paul are passionate about. “Part of our company mission and ethos is to invest profits into helping our world through regenerative agriculture and farming practices,” Ian explained. “It’s the surest and quickest way to slow climate change by sequestering carbon and producing oxygen.”

They gave their all for this.

A lot of celebrity-backed liquor is just backed by the name of the celebrity. They do not actually work behind crafting the drink. On the other hand, Somerhalder and Wesley spent a complete year collecting knowledge about rye, grain and corn proportions. They wanted to craft a more than an average bourbon drink but does not set your mouth ablaze as rye does. So they created an idea for a bourbon that would be smooth, smokey and woodsy.

After hundreds of combinations, they finally settled on the right combinations. A blend of Bourbon distilled in Indiana. And Brothers Bond bottled and distributed it in Arkansas. They got nervous, thinking that they tricked themselves into acceptance for a perfect blend. And they walked away and tried their blend again 20 minutes later. Then an hour later. Then the next morning. They loved it every time. “You have a whole team, and there’s a lot of science behind it,” Somerhalder says. But when they knew, they knew. “We’re like, ‘Stop, no more. Just stop.’ It was a cool moment.”

Liquor, especially Bourbon, is a difficult market to break into. The industry is very picky and extremely exclusive. Additionally, there are unimaginable financial barriers that halt someone from venturing into the business. Then there are other sets of regulations that need to be maintained. “It’s the most all-intensive spirit you can have other than, I guess, scotch,” Somerhalder says. “It’s highly competitive. The people who are in space are the ballers of the bourbon industry.”

They were chasing after the perfect blend. And they wanted to make a smooth and approachable whiskey that is nuanced even if someone who does not drink Bourbon could try and like it.

Do they have what it takes to shake up the world of Bourbon? Only time will tell.