There’s Someone Inside Your House: I Don’t mind if that makes the movie little interesting. 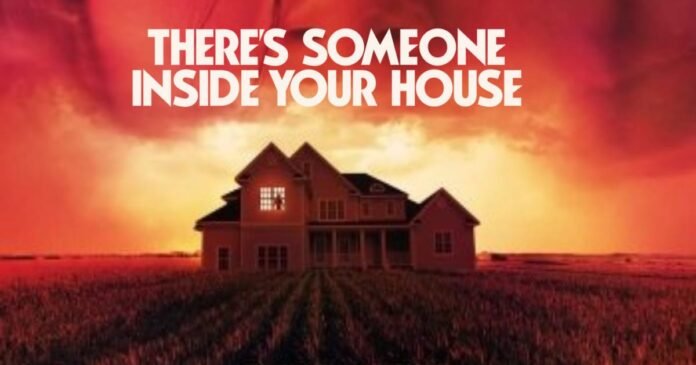 Do you like surprises? How about a masked man with a knife?
A unique intruder who takes out your life, “There’s Someone Inside Your House” is a blood-covered story of many people who die because they kept secrets. But who is he to kill them? Is he God or a devil? or just one of us?

This movie is about a killer with an agenda or maybe not. So let us follow the deadly footprints of this thriller to find out the secret.

A Horror novel by an American author turned into a movie. It revolves around the brutal murders and the story of Makani Young.

A secret forced Makani Young to shift to a new place. She wished for a new life, a new beginning. But the city turned out to be the playground of a killer. The series of murders in the town made the students in high school more cautious and confused. The brutal murders kept the city awake in terror.

Makani is hiding her secrets behind her poetry, even from herself. She is trying to forget her past; it burns her soul every day with guilt. She found peace in friendship, but the heavy waves of her mistake hit her with force; they pushed her back to the darkest place of her past. Makani’s fear started to increase along with the murders; everyone in the city became more cautious and fearful.

One night a regular party became the spot for the killers hunting place. The victim was one of Makani’s close friends Rodrigo. After the death of Rodrigo, Makani’s other friend suspected Oliver Larsson because he is different and, according to them, “a disturbed kid.” The accusation against Oliver made Makani uncomfortable as Oliver Larsson is her other secret. She had a small summer fling with Oliver but ended it without any explanation.

When all busy blaming Oliver, the real criminal was enjoying behind different types of masks. Makani, too, suspected him.

Why is Makani running away from a part of her life?

She discloses everything to her friends; they give her the strength to move on.  On her first day of junior year, Makani and other girls were kidnapped by a group of seniors from the school! Yes, kids are mean. They took them to the beach, and accidentally Makani pushed her friend into the fire; the hazing incident changed Makani Sun Woo to Makani Young. She felt little peace after confessing her mistake to her friends, but not for long.

The masked man again attacked her, but finally, she realized it was not Oliver, but who else? The masked man is none other than Zach, another friend of Makani, a rich sociopath. Makani and Oliver rushed into the corn maze to save Zach and his father from the fire, but the sight was more horrifying. They saw Zach killing his father; he killed everyone who he thinks is a hypocrite. Finally, he attacked Ollie but still could not save himself from Makani.

Review: Some stories should stay in the books

“There is someone inside your house” had a great start; however, gradually, the movie lost its charm. You will feel the thrill of a mystery initially but lose interest in between. The vibe of the movie is fascinating, but not for 1 hr 36 mins. The film had many gaps; the built-up about the relationship between Makani and Ollie was too much; I felt the formation of their story was incomplete. The audience will feel like the makers are rushing to wind up the movie; the dialogues are not even making sense.

The film is not exactly like the story in the book, which is not the issue. At the end of the movie, I kept thinking about why the murders weren’t happening in the house; well, that was the point, right! That’s what the title suggests. The murderer removed the mask. I was not surprised, and it wasn’t enjoyable. I had huge expectations for this movie, especially after watching the first few takes, but unfortunately, it quickly went downhill.

There’s someone inside your house: People, there is a reason why books are better!

The disappointment will hit hard if you love watching movies. This movie will leave you speechless, of course! Not in a good way.