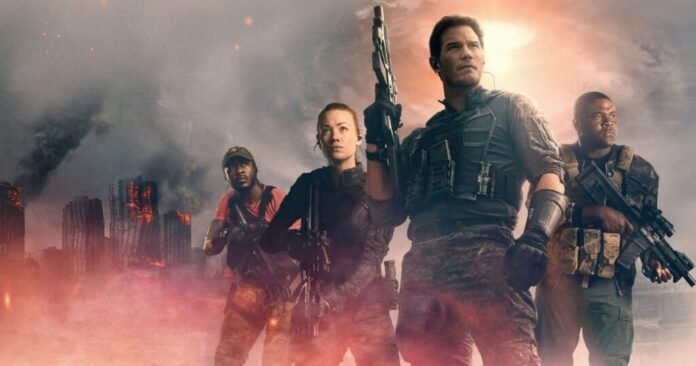 ‘The Tomorrow War’ stars Chris Pratt as Dan Forrester . He is a science teacher who has also served in the military, leading troops in Iraq. Suddenly, a group of time travelers from the year 2051 arrived to warn humanity that they are losing a war against invading aliens in the future. The only chance they have is to travel to 2051 to fight alongside them from the present time.

This movie goes in a lot of directions, and there are millions of subplots. Some of it is cool and creative. It had many potentials, but due to its overstuffed nature, the feature film does not amount to much.

This is just like a stitched-together amalgamation of a million sci-fi movies that you might have seen before. You’ve got the alien invasion. You’ve got this ragtag team of misfits coming together to try to fight them. You have unresolved father-son issues, and you have wacky wisecracking sidekicks and the fate of the world at stake.

You might also love: 11 Breathtaking Secret Facts About Your Favorite ‘Money Heist’

The first part of the movie is very easygoing. It is one of those beginning parts where you get a taste of normalcy. There is silence and stillness. And then everything devolves into chaos. Most of the segments in the movie are rushed. The beginning should primarily focus on establishing the situation and have used a little more time. For example, they could have shown Dan’s preparations to travel to the future to fight.

The viewers could have learnt a bit more about that, but they totally moved away from this. The movie does explain the reason for pushing Dan and others so quickly into the war. Still, ultimately it really just functions as more of a device to move the story forward rather than something that adds to the film and the overall experience.

This is a scenario we’re talking about, where untrained adult fighters are being called in to risk their lives and save humanity. I just would have loved to slow down there a bit more and get a better sense of what it takes to prepare to fight in a war like that. And also to delve into the fear that comes with being thrown into such a scenario. Moreover, to see how different people handle it. The movie does scratch the surface of all of that. But it really does not go deeper than that. And I feel like they missed such a major opportunity with this one.

Similar read: Shadow and Bone vs. GOT, Are they so different? As for the actual alien-fighting when they do get there, the action is pretty solid. And I think that, for the most part, the aliens (the white spikes) that they’re going up against looking good. They are creepy. And you most certainly feel the threat of how viciously and violently they go after their targets. So I thought that was very effective.

Throughout the movie, at least through the first act, they are setting up what these aliens will look like. These films have done this repeatedly, where they build it up and then when the viewers see the alien, they feel like they have seen this or some similar versions of this before. This was one of the decent creature designs for the horror enthusiasts out there. The CGI on the creatures is remarkable. It adds so much to these battle scenes.

You might also love: #11 Facts that could surprise even die-hard ‘Suits’ Fans

The Tomorrow War: No connection with the audience

When you are missing a well-established connection to the characters, there is really just no response. The viewers do not connect strongly to these people being in peril. It is something that I thought showed great promise. it could have been far richer than it was. ‘The Tomorrow war’ does not feel like one big epic when you watch the whole thing. More like three very distinct chapters that don’t flow smoothly from one to the next.

Chris Pratt is not cut out for this

In the performance department, Chris Pratt is fine. He gets the job done. But it is exactly the type of performance you would expect from him, in a role like this. There was just no elevating it. A bland suburban dad is not Chris Pratt’s strong suit. The thing that makes him interesting is the goofiness when he plays the character of Peter Quill. There is nothing like that at all for him to play here. So that swagger that elevates him beyond the average white dude is absent. And he’s just not up for the dramatic needs of this film when there are serious scenes.

The film just follows the blueprint, and it works well enough. Yvonne Strahovski, however, takes the material that she is given, and she runs with it so well that it kind of feels like this movie did not even deserve to have such strong work from her. I have to add that the way that this movie uses Betty Gilpin is just downright criminal and hugely disappointing.

Similar read: Virgin River: Season 3 is complicated, but what happens at the end of season2?

A few enjoyable moments in The Tomorrow War

So many “this doesn’t make sense but let’s keep the action going” moments I enjoyed:
1. the relationships, father and daughter, husband and wife, father and son, in the movie. A few cliche scenes, but overall somewhat complex and interesting dynamics
2. Cheesy action movie humour that resulted in some chuckles.
3. The action was fun and over the top moments were in a “that was stupid but cool” way

I could have made a very long list of all the promising ideas that ‘The Tomorrow War’ has, and I would absolutely love to experience it in the movie. But the weak execution renders most of the ideas meaningless. As a result, the audience winds up getting a narrower focus.

The movie could have made something out of some of the subplots, but with how much they try to cram into this one movie, almost none of it winds up working very well. It’s definitely too long, but the creature design is absolutely outstanding. Even with the flaws within the characters, it was an interesting watch. But ‘The Tomorrow War’ delivers on its promise of being an entertaining and action-packed summer blockbuster.