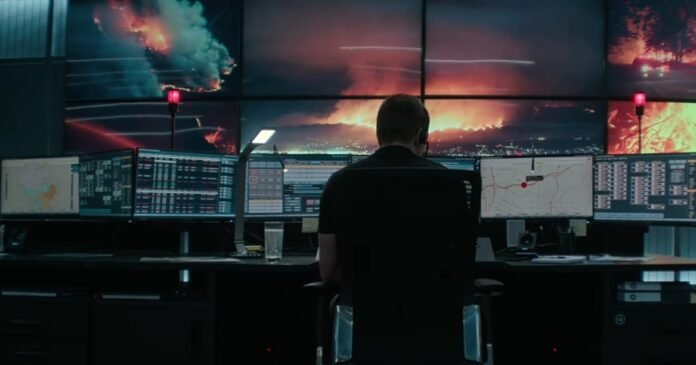 All of us vanish one day, but what if we are dying each day? The story of Joe Baylor is the set of consequences of his actions, which slits him with the knife of sorrow and fear of losing his daughter. Here is the ending explained for the Guilty for you.

A furious cop on desk duty, is he wicked? or just drowning in the sea of iniquity? The director, Antoine Fuqua, serves the plate of a thriller yet keeps the audience starving until the movie’s end. A spotless demonstration of a troubled cop who is trying to conceal behind the wall of denial. Jack Gyllenhaal plays the role of Joe Baylor, the cop. A distressing event tied Joe Baylor’s mind with repentance. In a short period, Antoine Fuqua shows different layers of Joe Baylor, from hostility to sluggishly breaking into pieces. Read the full movie review here.

As a 911 operator, Joe Baylor deals with different disturbing calls, but one of them changed his fate. Joe Baylor’s Leaden heart found a way to peace through Emily Lighton’s petrified voice. His desperate attempts saved a family from a tragic episode and helped him to face the breakdown. Joe Baylor supports Emily; he stays with her and shares his story to engross her unstable mind. Joe Baylor’s darkness spreads the light of hope in Emily Lighton’s Life.

The Guilty: Ending Explained – Why did he change his mind?

Throughout the film, the audience feels the tension around the place, and at the end, the tension blasts into tears when Joe Baylor accepts the consequences of his action but changes his mind? His family and friends help him handle the situation; still, the process of saving a family reversed his decision to get away from his actions. Finally, he changed his mind because he realized the depth of his crime even though it was an unexpected incident.

During comforting Emily, Joe tells her that he killed a 19-year-old man. During that conversation, Joe faced his truth. Emily is the mirror for Joe; he could not save that man, he could not stop himself; therefore, when Joe told her that, he could not hold back, and all this pain, confusion came out. Later, he called his friend, who would give a statement and told him not to provide false information to protect him. Joe Baylor took responsibility for his actions, but staying away from his daughter was more painful for him.

“Sometimes death is not horrifying, but living is”

(Visited 128 times, 1 visits today)
- Advertisement -
Share
Facebook
Twitter
Pinterest
WhatsApp
Linkedin
Email
Telegram
Previous articleThe Guilty: Are you ready for a Guilt trip?
Next articleThere’s Someone Inside Your House: I Don’t mind if that makes the movie little interesting.