Shadow and Bone vs. GOT, Are they so different? 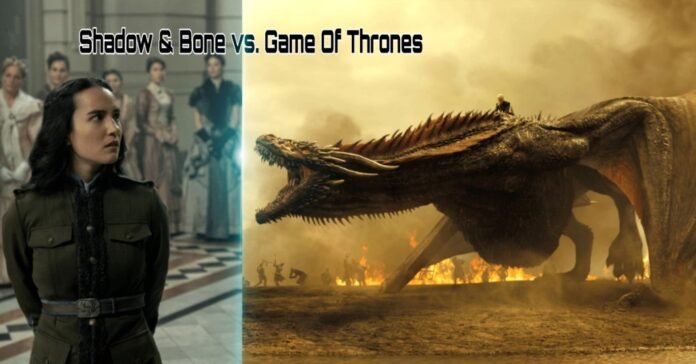 The Netflix original series Shadow and Bone, adapted from Leigh Bardugo’s bestselling Young Adult Grishaverse Trilogy, released on the popular streaming app on April 23, 2021. So it is out, and so far, so good. Still, of course, anyone who quenches their curiosity and watches the newly released series would acknowledge the metaphorical elephant in the room, the uncanny parallels of the eight episodes of Shadow and Bone to the classic fantasy gore Game Of Thrones aka GOT.

Is GOT worth watching?

When the vastly popular GOT streamed by HBO came to a close, it left an undeniable void in the hearts and on the screens of fantasy lovers for the past three years and counting. And that led to a quest for quenching the thirst for the suspense and thrill offered by the eight-season series.

With the TV and streaming sites drowning in choices in the vast sea of fantasy, folklore, sci-fi and best-selling book adaptations, no fantasy series has yet reached widespread popularity or the immense impact on viewers’ minds watching GOT entailed.

Why should I watch Shadow and Bone?

Shadow and Bone, based loosely on Tsarist Russia, seems like one such effort on Netflix. But, of course, Netflix has made many such efforts and granted generous budgets to many successful fantasy series. Hence, off the top of the head, The Umbrella Academy, The Witcher and Fate: The Winx Saga, watched and loved by the fans of the will-o’-the wisp.

However, out of the many series on various streaming sites vying to be ‘The Chosen One’, Shadow and Bone have the earmarks of a worthy successor to the suspenseful, medieval fantasy GOT delivered to the viewers. Stream it on Netflix.

Shadow and Bone tells the story of an orphan, Alina Starkov, from Karamzin, Ravka; she works as a war-torn country mapmaker. In the heat of a battle, she discovers her powers, shocking her to know that she was a Grisha- one with supernatural powers; this dormant ability reveals her to be the “Sun Summoner”, making her the only hope to offer safe passage through the vicious Shadow Fold. Suddenly, a map-maker orphan is a key to bringing peace in Grishaverse and that in its actuality paints a big old target on her head.

Alina Starkov is the protagonist in Shadow and Bone. Alina, an abandoned baby who perceives she is unimportant, is pushed into a fantasy realm and diplomacy, where she is entrusted to save the society.

Daenerys Targaryen has portrayed both the supreme savior and the ideal antagonist in Game of Thrones at various points during the series. And the majority of the time, she was somewhere in the middle. In Shadow and Bone, Alina has a childlike personality at the start, much like Daenerys and her wish to get her husband’s love. ‘

Alina sees everything in black and white, it is either right or wrong. There is and won’t be any grey area in life whatsoever. Likewise, Daenerys has both light and darkness inside her, and she has various likeable as well as unattractive or outright scary behavioral qualities, despite her harshest of dark turns at the conclusion of the narrative.

Similar read: #7 TV Shows/Movies like Money Heist that you will love

Innocence forced to grow up

Inej Ghafa is a member of a gang who, alongside Kaz and Jesper, travels to Ravka to kidnap the Sun Saint, only to learn that her beliefs conflict with the task. In Game of Thrones, Arya Stark is a kid at the start of the series, but soon she turns into a brave warrior. Self-determination and mental toughness guide Arya. Others may find this unusual and irritating. Arya Stark is a non-binary woman who fights for whatever is right. He prefers to fight and explore rather than dance and sew. Overall, juvenile Arya is a thrill seeker who enjoys new and thrilling experiences. Inej, like her series counterpart, is a moral compass. She feels that killing is wrong, specifically when it is unfair.

The classic enemies to lovers

First love is a powerful and life-changing experience. The theme of enemies to having a passion for each other is the significant theme in both Shadow and Bone as well as Games of Thrones.

Nina is a Ravkan Second Army Grisha soldier who Matthias and his Fjerdan drüskelle kidnap . Matthias takes Nina to Fjerda for trial and execution. Only Matthias and Nina survive after the ship they’re on collapses during a cyclone; they ultimately fall in love while helping each other to reach civilization. Nina reports Matthias as a slave trader to a Kerch citizen in the harbor to spare him from her citizens.

Jon Snow and Ygritte are also a haters to lovers affair all the way. Jon is an ignorant boy learning to become a gentleman when he encounters Ygritte. He’s never been in a relationship with another person. The only time he got close to having sex was because he was afraid of bringing a jerk into the world. While Jon falls in love with Ygritte in the end. She dominates the bulk of their exchanges; she does not really view him as an equivalent, she sees him as a kid, and she calls him one, and she takes command of their connection.

You might also love: Quiet Place 2 Review: A mixed bag of adrenaline and sighs

Vivid Mythology vs. Other World Plot

GOT has a rich crest of mythology and folklore deep-rooted into the series; George R. R. Martin laid out the innate suspenseful basis of the complex characters resonating in the hearts of fantasy lovers, which gave the series the much-needed foundation for constructing a fan base for itself. The machinations of politics, the thrill of high fantasy, the gore and the adventure make GOT undefeatable in the fans’ palates.

Shadow and Bone have much to offer, much to the satisfaction of the GOT fanbase; the high fantasy angle is still alive in the fictional world of Grishaverse, where the whole series is based. However, the thrill of the practitioners of magic or the “small science”, the complexity of mythology, is up for grabs in this newly released series.

Similar to the plot in GOT, Shadow and Bone has fictional other worlds which draws inspiration from the natural world, making them out-of-reach but still relatable for the viewers. Just as in GOT Braavos, Westeros were the fictional counterparts of the European countries of Venice and the United Kingdoms. Bardugo too has kept up with the idea and kept the series grounded and real by building a fictional world on the foundation of the all too known real world. Shadow and Bone have played on the familiarity of the known Nordic countries and Tsarist Russia to build Ravka and Fjerda.

This creation of other worlds with vast differences yet are not too different makes both the series even more exciting and immerses the viewers.

Political Warfare And Inter-kingdom Hate: Shadow and Bone vs. GOT

Shadow and Bone give us Grishaverse a world with medieval kingdoms and countries that are oh so distinct and a distinction, and differences do-follow. Bardugo has grappled with political intrigue, warring agendas and the uncertainty of survival. Ravka is shown as a kingdom with nothing but despair to offer, no trade, no supplies, just the looming Shadow Fold cutting them off, and add into it the war with Fjerda and the bordering kingdoms, all being looked over by an ignorant king, a series set amid the upheaval and a brewing war, wonder where we last saw that!!

Game of Thrones showed us the rivalry of kingdoms for the acquisition of the Iron Throne. It gave us the same thrill of fomenting wars and ripe context to relate to present international conflicts, letting the horses of imagination run wild.

Into the mix are the personal agendas and vulnerabilities of Alina and her elimination. The complexity of characters shown in both the series makes them more intriguing than the portrayal of straight-up villains and the knight in shining armors.

Neither Netflix nor HBO spared any expenses in making both series look as accurate as possible and make the viewers sit up and take notice. The proper usage of VFX and CGI made sure that there are no rough edges. And the fantastical monsters and magical elements look believable and grounded. The visuals are gruesome and raw, often so vicious the ripping of hearts and the gathering of Darkling shadows are made to look so believable that the viewer cannot help but get immersed.

Shadow and Bone vs. GOT: Are their themes so different?

So to argue, Game of Thrones and Shadow and Bone are as much different as similar; even though Shadow and Bone have many seasoned characters who have lived through one too many battles of life, it is a YA bent series, unlike Game of Thrones. It gives the readers the thrill and the gore of GOT but is not as R- rated as GOT sitting very firmly in the wheelhouse of YA fantasy.

You can watch Shadow and Bone in Game of Thrones along with teenagers. It is fast-paced and brimming through highs and lows, and just like GOT, it is not spoon-fed to the viewers. Instead, it leaves the viewers waiting for more. And of course, Shadow and Bone work on the plot with one protagonist Alina. Whereas GOT does not have any qualms in killing off potential main characters.

The charm and the emotional attachment of GOT to be sincere are unbeatable and any Netflix original is yet to achieve this feat. With the machinations visible, we can say that Shadow and Bone are the makings of being the next GOT, but the verdict is still undecided. The battle of the two series does end with saying that GOT has an emotional connection with the fans. To beat that, Shadow and Bone need to pull up their socks and develop the characters along the way. A one-season cannot compare with an eight-season classic with a solid foundation. Even though Shadow and Bone ticks all the right boxes, there is a lot to come, and we cannot wait for it.

Trending today: Friends: What happened behind the scene? #11 shocking reveals