Scream 5: Yell Out Loud, a Killer is awaiting you at the backdoor 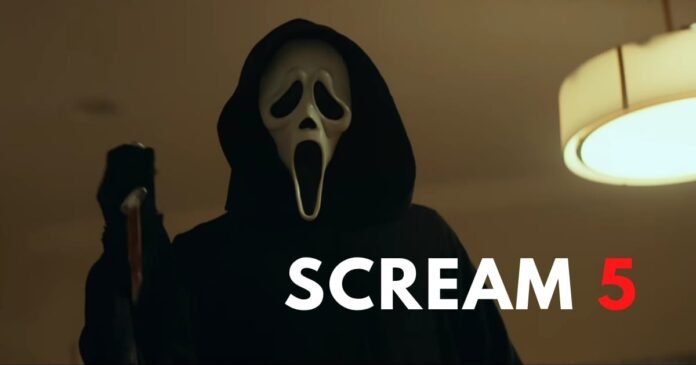 Stop right there, there’s a killer with a sharp knife and a Halloween mask lurking outside your door…. you have two options: Scream and fight for your life, or run away, but be aware that he will make you fall.

Which option do you prefer? To fight back or to flee. People fighting for their lives and some losing their lives are depicted in the film Scream. How we react to a circumstance in which we are unexpectedly placed is determined by our consciousness and willpower. Our ability to conquer the situation is dependent on our sense of action.

Scream 5 is a 2022 American Slasher film written by James Vanderbilt and Guy Busick and directed by Matt Bettineli-Olphin and Tyler Gillett. The film is the fifth in the Scream franchise. Despite being marketed as a reboot of the franchise, it is a direct sequel to Scream 4 and the first in the series to be directed by Wes Craven since he died in 2015. At the start of the ending credits, the picture is dedicated to Craven.

Do you enjoy horror films? If you answered yes, you’re probably excited to see the new Scream. The new Scream has several familiar figures returning to the blood-soaked town. So, let us now open the door to see who is the bloodsucker with a knife.

Tara Carpenter, a high school student is home alone when she is assaulted by ghost face 25 years after Billy Loomis and Stu Macher tormented the community to Woodsboro. She is severely wounded but survives the attack.

Sam Carpenter, Tara’s older sister visits Tara in the hospital with her boyfriend Richie. She reunites with the rest of Tara’s pals- Amber Freeman, Chad, and Minky Meeks –Martin and Liv Mckenzie.

Richie and Amber admit to being rabid fans of the stab series. They are dissatisfied with its direction and want to tell a new story based on actual events with Sam as the protagonist because she is Billy’s daughter.

Gale fires a shot at amber, who lands on the stove and catches fire. Sam is hurt, but a vision of Billy’s leads her to Amber’s knife on the floor. She uses it to stab Richie numerous times before shooting him. Amber, who has been badly burned, tries to assault the group again, but Tara shoots her down.

Tara is rushed to the hospital along with the Meeks twins. Sam expresses her gratitude to Sidney and Gale for their assistance.

You might also love: Top 9 Horror movies by James Wan You would Love

Scream is a horror picture that deftly balances connections to the original films while avoiding the self-aware smugness that has doomed many a sequel, resulting in a product that seems consistent with the previous four films and distinct enough to speak for itself. Some of Craven’s craftsmanship and talent with actors are lacking here, but by the time the film’s insane last act reaches the rafters.

There have been four sequels to the initial film since its premiere. Campbell, David Arquette, and Courtney Cox star as the franchise’s mainstay characters, who return to be frightened by a masked killer time and time again. Along with several new cast members including Melissa Barrera, Jack Quaid, and Jenna Ortega, Campbell reprises her role as Sydney Prescott in this new installment, more determined than ever to stop ghost face and prevent the killer from torturing the helpless.

At the very least, the new scream appears to grasp this. it has a stripped-down feel to it that may lead you to believe it’s a more simplistic reboot at first. It begins with the traditional girl stuck at home talking on the phone attack being interrogated by a mysterious voice who at first appears kind but gradually devolves into the slithery.

During the attack, the hospital seems to be deserted. Not just one patient and one police guard but physicians, nurses, and other staff should all be there, especially given the hospital’s apparent size in the movie Scream.

Before his death, Dewey and Gale share a sorrowful sequence in which they discuss the collapse of their marriage. Dewey blames on his inability to cope with living in the shadow of Gale’s success. Arquette and Cox famously fell in love while filming the first Scream and they married in 1999. One of the many Meta aspects of the franchise has been how the films have mirrored their relationship.

Latest News: Christopher Nolan to make the next film with Universal Studios? Read the scoop inside

How real-life is affected by Fiction?

This time around, the young people who took on the Ghost face mantle allude to a more current and troublesome phenomenon: the obsessive toxic Internet fan.
“How can fandom be toxic?” you might wonder. In the epilogue, Richie sneers and asks. It’s fascinating to see how fiction influences real-life events. They’re pals, so why do they kill themselves for the sake of a story? When individuals get addicted to fiction, that people forget about their everyday lives and enter a fantasy world.

What is the connection between Richie and Amber?

The movie Scream 5 follows in the footsteps of its predecessors by scattering clues to the ghost face killer’s identity throughout the film while adhering to the horror standards of Scream. Amber Freeman (Tara’s best friend) and Richie (Sam’s Lover) are ghost face killers, according to Scream 5’s twist ending. Despite Dewey’s repeated warnings not to trust the love interest, which was one of the primary clues to the killer, everyone seemed to believe Richie. To everyone’s amazement, Richie confesses that ‘there are always 2 killers’.

Blood is thicker than Water

Tara descends into a life of drugs and crime, as a dreadful secret about her origin is uncovered, shattering her family. Sam returns to her hometown when a new form of ghost face attacks her sister. Finally, Sam tells Tara that she would be with her forever. And she will not abandon her as she did previously when she flew away. The sisters were brought together by the attack.

By concluding the review I should say the fifth installment in the meta-horror series proves that there are still layers of meta-ness to find, new scares to experience, and wicked fun to be had by handing the torch to fresh blood. The film has a lot of fun with the prequel premise. The directors fumble their juggling act a few times in the final act, but for the most part, this Scream is worth shouting about…