Pieces of Her Season 1: Sketching the mother’s past out of bits 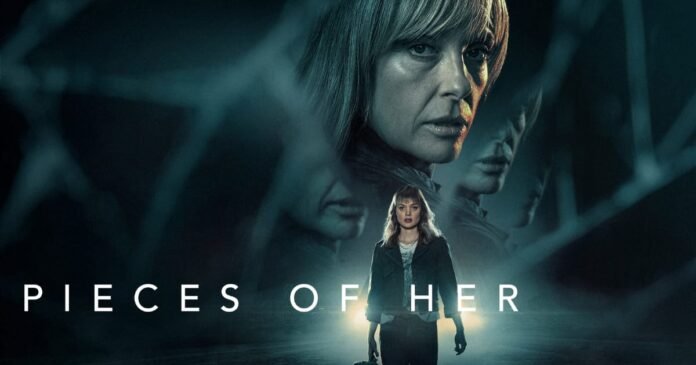 You ever have that thing where you think you know someone….
and then one day,…you’re totally wrong?

The key to the closed past is always in our minds’ sockets… no one can discover the entire us. Pieces of Her tells us how a daughter opens up the past of her mother. The overprotective mother tries to hide the memories she never wanted to disclose, even to her kid. But fate put her in the midst of violence. Bursting smoke and smudges out of it came from the long-forgotten past of Laura Oliver.

Pieces of Her features so many twists and time-jumps. Let’s have some patience to step into the review of a wonderful plot-line.

Laura slices the assassin’s throat in the first episode of Pieces of Her. The 10-minute scene makes fans say “The Pieces of Her is incredible… shocking act of violence..from the very moment you will sit tightly with your curiously opened eyes stamped in the series…” for sure.

Mysterious past of Laura Oliver

Laura is holding more stories about her bruises and the health issues she is facing. The pain she holds onto the shoulder is revealed only when Andy finds her mother’s past.

Pieces of her: Karin Slaughter

Pieces of Her is a thriller novel written by Karin Slaughter, an American crime writer. According to the Washington Post, the characters keep you involved all the way, as does the vivid writing of Karin. The best-selling novel cleverly deals with the delicate relationship between mother and daughter. That’s why, when it was made into a series, it received widespread acclaim.

Pieces of Her Season 1: Plot Overview

The daughter of wealthy pharmaceutical head Martin Quellern is living a normal life as Laura, a speech-language pathologist.
An abrupt, violent attack on their daily cores opens the pathway to who Laura is. After that, the history and identity of Laura are revealed by the lonesome journey of her daughter, Andy Oliver. The visibly shaken Andrea was left with so many thoughts and feelings. Andrea discovers her mother’s true identity after being abandoned for so long.

Charlotte, a successful television writer best known for her work on Homeland, Foess/Verden, and House of Cards.

Her four-year journey resulted in such a beautifully clustered mother-daughter love story”Pieces Of Her”. As an adopted child, Charlotte Stoudt had a personal connection with the story.

Pieces of Her season 1: Review

A child calls for help from a stranger who is held in a room outside in the snow. The call was unanswered by Andy because it was not a real call, but the recurring dream of Andy, who suffered a very bad childhood with his mother in jail and did not know who her father was…

A girl who is away from all the hashbush activities of today’s generation The incidents that happened on her birthday made her realize that from now onwards, she has to travel alone. Her mother says that it’s time for you to live alone… But for Andy, who is not as strong as her mother, that was a herculean task. Andrea discovers on her journey that her mother has been keeping dark secrets for more than 30 year, a number equal to her age and a difficult task for Andy to uncover.

Pieces of her: Intense confrontation

Andy has to go multiple places to find all the answers to the questions over the web of lies. So many revelations are embedded in the Netflix series “Pieces of Her.” It is hard to untangle the pieces and find her.

More truths come to light by Nick’s finding of the audio tape against Jasper, the brother of Jane. Hey guys, now are you prepared to know another twist in the story of Pieces of Her? Jasper, now a candidate for Vice President of the United States… so much so that I have to be in the store.

Toni Collette and Bella Heathcote play Laura Oliver and Andy Oliver, the mother and daughter whose lives changed in the aftermath of a violent attack. The performances were excellent, especially the stellar performance of Toni Collette. She had put in her full effort and did justice to the character. She is acclaimed widely on social media for her outstanding performance.

Pieces of Her Season 1: Who are you?

To know more about Laura Oliver, you need to go to the midway point of the series, Pieces of Her. She was originally Jane Queller, the daughter of a wealthy pharmaceutical head, Martin Queller. She fell in love with Nick Harp, who runs a group called The Army of the Changing World, much against her father’s wish. Further, Jane becomes an active member of the group and helps Nick by getting involved in illicit activities. As the infatuation grows stronger, Jane eventually becomes pregnant. The real twist comes when the couple planned to embarrass her father at a conference in Oslo. But everything was turned upside down by the murder of her father, Martin. The story’s thread is tied in the moment, resulting in Jane in prison and, later, Laura in witness protection.

Andy, a 30-year-old woman, finds nothing new in her daily life. She did not complete her education and is uninterested in her current job. When an abrupt incident happens in her life, she has to flee.. support herself.. She hardly manages the situation. Because Andy was a girl who completely depended on her mother; this was a painful transition for her. Now it’s time for you to pack your bag and watch the incredible Netflix series “Pieces of Her Season 1.”