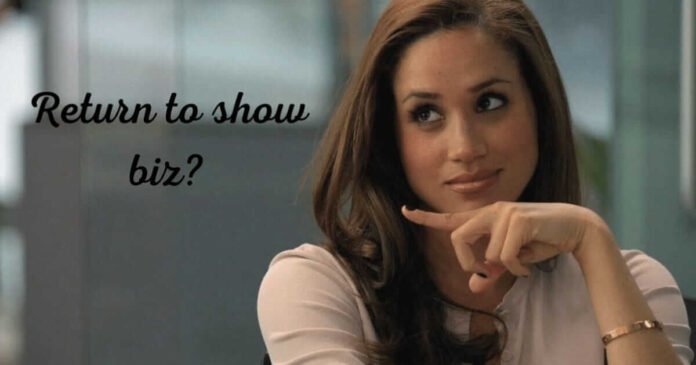 Experts are commenting on how Meghan Markle, Duchess of Sussex, might have been ready for the life of royalty now that she and Prince Harry have abandoned their royal duties behind. According to the monarch’s biographer, Meghan is certain to be remorseful about giving up her career as an actor to marry Harry.

Since the suits star departed from the British monarchy in early 2019, fans are now cheering for her to resume her role as Rachel Zane in the spin-off miniseries. After marrying Prince Harry, the Duchess of Sussex decided to quit acting. However, now that she has stepped down from her royal duties with Harry, she may be able to go back to acting.

In an interview with Oprah, Prince Harry and Meghan Markle made several disturbing disclosures regarding racism and mental well being. Meghan blames the Royals for spreading lies, and a new documentary looks at the prospect of her rejoining the big screen, despite the fact some of the more muted disclosures have taken some little longer to unravel.

Who is Meghan Markle?

Meghan, Duchess of Sussex, is a young actress who is now a part of the British monarchy. Markle was born as well as raised in the Californian city of Los Angeles. She is a businesswoman. The Tig, Markle’s lifestyle blog, included a piece highlighting powerful women. In 2015–2016, she was also recognized for designing and releasing two fashion collections.

Her acting career began during her time at Northwestern University when she was a student. She is best recognized for her seven-season portrayal as Rachel Zane in the Television courtroom series Suits. Markle plays the part of a paralegal at Pearson Specter and goes on to become an associate. The actress invested nine months a year in Toronto whilst working on Suits. According to Fortune magazine, she was compensated $50,000 each episode, equating to a $450,000 yearly income.

How did Meghan Markle start acting?

She performed as a freelance calligrapher and tutored bookbinding to supplement her acting income. Her first appearance on film was in a tiny part as a nurse in an episode of the prime-time drama General Hospital. After that, she worked as a “briefcase lady” on the US edition of the quiz show Deal or No Deal. Apart from that, she had other contract performing and modelling roles.

In the first two episodes of the sequel of Fox’s Fringe, she played Junior Agent Amy Jessup. Markle appeared in minor appearances in the TV series Century City (2004), The War at Home (2006), and CSI: New York (2006). Her work exceeds her reputation as a performer. Her large body of work is a testament to her range and caliber as a performer. She strives and determination to be in the industry and work hard.

Why did she quit acting?

Meghan Markle’s journey on Suits is cut short as we see her leaving with Mike Ross to work in Seattle. However, due to her marriage in the monarchy, she left after Season 7 of the show. She has not appeared on television after that. Meghan’s Royal obligations appear to be at the heart of her exit from Suits, with her final episode airing on April 25, 2018.

Meghan revealed her plans as an actor when Prince Harry and Meghan announced the commitment. In brief, she is putting her career aside to become the Duchess of Sussex. She simply sees it as a shift, she says. It’s a fresh era for her, especially after she spent seven years on the series “Suits.”

She said in an interview, “I think what’s been really exciting as we talk about the transition of this out of my career, but into the role. The causes that have been very important to me. I can focus even more energy because very early out of the gate. I think you realize once you have access or a voice that people are going to listen to. With that comes a lot of responsibility which I take seriously.” She was excited as well as nervous to be a part of the monarchy.

Editor’s Pick: All of Us Are Dead – Horrific Zombie Apocalypse Finds You Trapped

Will Meghan Markle return to acting?

Prince Harry and Meghan stunned the world with their announcement to give up the royal family in January 2020. Many people wonder if Meghan Markle would return to performing after leaving their royal obligations behind.

Currently, Meghan Markle is not in any ongoing television or movie projects in the industry. There was, however, a small gig she did for Disney. According to The New York Times, she has sealed a signing a voice-over project agreement with Disney. The contract included an exchange for a gift to the conservation organization Elephants Without Borders. It is also believed that she filmed it before going on a six-week vacation with Prince Harry.

According to a news report, the Suits stars consulting with agents to begin resuming acting. Meghan has been accepting calls and discussions to plan for her acting comeback. According to the publication, she’s been in contact with “several industry professionals” from her new location in Canada’s Vancouver Island.

She desires to pursue a documentary avenue to follow up on certain topics she is passionate about. This objective seems to be the subject of several of Meghan’s subsequent conversations. and it will undoubtedly influence the type of employment Meghan’s agency seeks for her. She is enthusiastic about the possibilities.

Trending Today: Top movies of 2021, What to watch next?