LulaRich: A take on many pyramid schemes 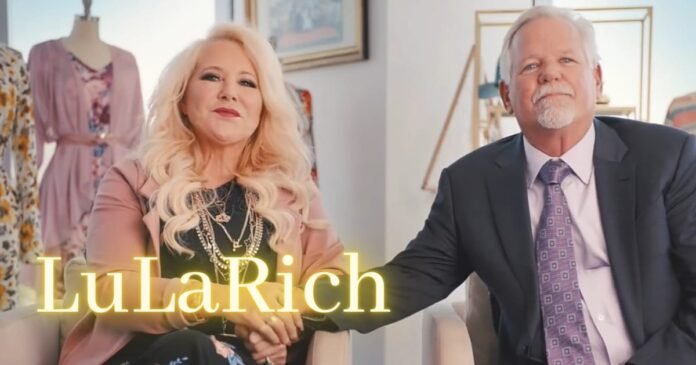 LulaRich introduces you to the religion of money-making. Cult leaders and luxury scams are twins. They essentially have the same type of charismatic leaders, gullible members, and misdirection goals. They’re also alike because they are literally every non-fiction present on the internet or television. Amazon Prime released an exposé on one such cult (business) the previous week.

The intriguing account combines pictures of sparkling trousers and other beautiful apparel with the tragic narrative of DeAnne and Mark Stidham. They are the co-founders of the apparel company LuLaRoe. Throughout the episodes, they expose their malevolent acts.

DeAnne began selling maxi-skirts in 2012 and discovered the MLM model. This entails having somebody act as a vendor to buy wholesale and sell it back at retail. The masterminds formed the corporation in 2013. By 2017, it had vast numbers of sellers and profits of over 2 billion dollars.

Since social media was the weapon for most of that advertising, it spread very quickly. The concept was marketed as the American Dream. A financially rewarding domestic business with low-priced goods, trendy clothing, and membership in a national community. This was too good to ignore for so many.
However, as with so many MLMs, they guaranteed users a good living in exchange for a $5,000 “starter kit.” Several of the vendors contacted didn’t have that kind of cash on hand. However, they seemed so desperate to get their business off the ground that they found a way.

How did the woman waste thousands of dollars in this pyramid scheme? That is what the story is about.

LuLaRich, the new documentary film on Amazon Prime Video, digs deeper into the strange world of LuLaRoe. It demonstrates how and why the company grew from a modest side business to a billion-dollar apparel kingdom. The kingdom was accused of defrauding countless women through its multi-level sales channel.

Far too many aspects of LuLaRich feel like additions of earlier cyber money-laundering scheme documentaries. This is now a basic formal rise-and-fall structure of such documentaries. This with the support of familiar sequences of fakers makes for some good drama. It has ED Talk-style new leader monologues, ambitious businessmen and a court case etc.

The creators offer a more exhaustive environment image for multi-level sales firms from Amway to Mary Kay to Herbalife. They do this with the aid of one or more MLM specialists or reporters. Mark and DeAnne maintain a relaxed, confident demeanor when speaking to the media. However, in recordings where they are formally questioned, or sometimes during their corporate Zoom debates with workers, the illusion shatters to show a grim reality.

The report emphasizes how these processes attract and retain women as a group and stay-at-home mothers in specific. It talks about how prospects to earn just that little additional income can convert into the desire for full-time money for part-time work. Finally, seeing how that can keep evolving into the never-ending rush of a marketing strategy that depends on the people at the highest level getting very rich.

Former colleagues recall Mark comparing himself to Mormon leader Joseph Smith, revealing their larger-than-life selfs. LuLaRich doesn’t explore any new territory, but it shows compassion for its fragile characters and successfully layers several of the story’s crazy, but not so unexpected, turns.

LuLaRich is a fascinating look into how the Stidhams exploited vulnerable people. The intelligent, ambitious women of LuLaRich open up about the fraud of losing their funds for a corporation that they think only mistreated them in return.

Courtney Harwood explains in episode three, “Blow-Up,” that DeAnne urging her to go to Tijuana for weight-loss treatment was her final straw. However, due to her reluctance she was being isolated from her colleagues. All the vendors were told to attribute a specific attitude to LuLaRoe, portraying the brand as a life-saving gift.

#BecauseOfLuLaRoe was their media platform’s hashtag.

These tales, which look so convenient in front of the Stidhams’ goals, certainly did not affect the company’s operations. However, they are crucial to this documentary that emerges as a portrayal of a market that has an inclination to have an unending hustling. This ends up providing the ideal backdrop for a compelling narrative.

The women in this community had to join together through an online community to debate and expose injustice. Further, they were made to believe that they could opt-out at any time and return the merchandise for which they had paid thousands of dollars.

This topic gives Fyres a means to reinterpret a narrative that has already been widely covered by the mainstream public. Here, the LuLaRoe tale felt more new and less picked-over. In LuLaRich, there isn’t much observable philosophizing about what it all signifies, which is to the project’s advantage. However, this four-episode documentary series is worth seeing if you’ve never read of LuLaRoe. It’s bizarre and shocking, but it’s also instructive about how such a company functions.

The Stidhams maintain that they are not part of a pyramid system, but LuLaRich participants disagree. Jenner Furst and Julia Willoughby Nason intelligently combine video from DeAnne and Mark’s 2019 court proceedings with documentary recordings. It demonstrates that the pair understood precisely what they were doing, although they didn’t confess it.

Latest News: Are you a Guardians of The Galaxy fan? Here is a sneak peek

LuLaRich: See it or Skip it?

LuLaRich is full of the same visual brilliance as LuLaRoe’s clothing, thanks to Furst and Nason. They give individuals like Blevins and Harwood a safe place to talk about their tragedies, manage internal pain, and publicly air their concerns.

LuLaRich is a must-see for everyone who likes films about frauds or groups. The LuLaRoe tale grows fascinating and explosive with each chapter of the four-part series. Most of the series is amusing and shown in a style that calls to mind the very flashy reality TV. LuLaRich contains real-life stories of women who are moving, incredible, and irritating. Watch this one for the love of scams.

Trending Today: Wenwu – Did Marvel give its Best ever Antagonist in Shang Chi?

(Visited 108 times, 1 visits today)
- Advertisement -
Share
Facebook
Twitter
Pinterest
WhatsApp
Linkedin
Email
Telegram
Previous articleAre you a Guardians of The Galaxy fan? Here is a sneak peek.
Next articleChristopher Nolan to make the next film with Universal Studios? Read the scoop inside