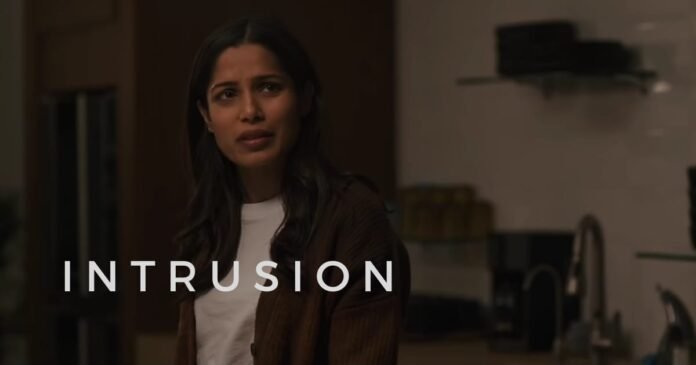 A thriller that turns out to be a performer’s movie. Intrusion is about the game of finding the truth from the little commotion in the behavior of a partner. The story accelerated from an environment of a happy couple to a suffocated partner. But what made her uneasy in their dream home? Is it an illusion or a surprise? Let’s find out what is in the basket of this new Netflix release.

A couple stays in an isolated place and starts their new journey. However, after a while, they face various issues in the house. Two uncalled guests turned the table of their lives and forced them to make decisions that might hurt both of them. Gradually the tension grows between the couple. One creates a web of lies, and other falls deep. The story reveals many characters, but they fade away.

Intrusion has the potential to grab attention, but as the story progresses, its predictability increases at a very early stage. The story is shot in a village, a house in a secluded place. A happy couple with a new chapter, and their motto is not “that couple.” The turning point comes with a home invasion by two men. It not only shakes the life of the couple but also unfolds a different side of a partner. Meera, the role played by Freida pinto, starts to connect the dots to understand the pattern of the situation.

First, she focused on her husband’s behavior and formulated her way of investigation, but later she closed all the doors of doubts and listened to her heart. After watching this movie, I surely am not going where my heart takes me because sometimes the destination would not be that dreamy! The first red flag for the wife was the hidden gun, the fact that her husband had been hiding a weapon in the last 12 years, obviously that pushed them in the zone of “that couple.”

Freida Pinto plays the role of Meera and Logan Marshall-Green plays her husband. The character of Logan Marshall creates a lot of tension from the start, and it will give viewers a taste of a creep. The background and the whole set made it easier for the audience to leave the movie with the answers within 20 minutes.

The conversation between the detective and the husband was so uncomfortable that it also increased the level the obviousness. The character was so easy to read that it took the fun out of the movie. The process of finding the truth behind many layers of suspicious behavior is covered by love and logic. Meera is scared of her loving husband but at the same time believes him when he links his behavior with other issues. Logan Marshall’s character results from many psychological problems, which unfortunately resulted in his unacceptable crimes.

Sometimes it’s good not to see what’s expected. The movie’s execution is so perfectly done that in the beginning, the audience will feel the need to be attentive, but later on, it just falls into a typical situation, making intrusion less intriguing. This psychological thriller shows outstanding performances, but unfortunately, even that could not hold the story.

The set: I could feel the bad vibes; why couldn’t you, Meera?

I felt the house built by her husband was not even on earth, and the place is so much isolated than it should be! And so much bigger than it needed to be. Even though the couple was married for 12 years, Meera seemed very detached from her husband, and on the other hand, her husband’s love is overflowing from his heart; NO! it was not romantic. Building a vast house is itself a reason to suspect, and we could see that doubt in the eyes of the detective played by Robert John Burke.

Similar read: 9 Wonderful movies like Knives Out you don’t want to miss

Life has never been easy for Meera, and she has been through many ups and downs. After undergoing the treatment of cancer and surviving depression caused due to infertility, she was slowly picking up the pieces, and Henry helped and supported her. Both the actors delivered good performances. We can feel the intensity of Meera’s fear gently growing and Henry’s aggression towards Meera for not supporting him in managing his stress (in the weirdest and most psychotic way possible). In the last scene, we can see how mentally unstable Henry was. Logan Marshall and Freida pinto played the characters with ease.

Intrusion: Watch it or Skip it?

You can watch to get the vibe of a thriller movie, but skip it if you are a fan of thriller movies. Lack of suspense is a culprit in this story.