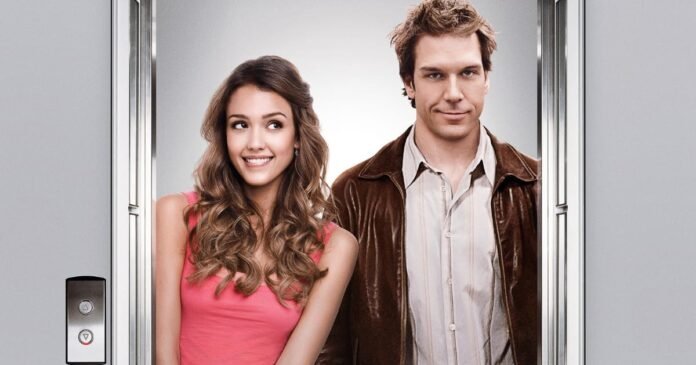 Good Luck Chuck is essentially a comedy of errors and a full on pass-time piece of cinema. The movie premieres on Netflix and with the gap in time, let us find out if it is still relevant or not.

When young Charlie (Dane Cook) rejects a Goth-inclined friend’s forceful make-out approaches during one session of spin-the-bottle, a hex is cast on him by an Emo friend. Good Luck Chuck is set in the 1980s. We realize this because of the music in the background as well as the caption that tells us really.

The introduction depicts Charlie (later Dane Cook) as a teenager refusing to reveal his manhood to the goth girl with whom he gets up in the closet throughout Spin the Bottle. She casts a curse on him in reaction to his sexual hesitation. Every lady Charlie sleeps with will form a relationship and marry the next person after him for the entire life.

Years down the line, Charlie, who has become a renowned dentist, is still unable to find satisfaction in love. Nevertheless, Charlie meets Cam (Jessica Alba), who works at a seaquarium and is so enamored with penguins that she would be ready to spend the winter sitting on several of their eggs.

Her character feature, aside from being attractive and pleasant, is that she is a clumsy oaf who is so physically hazardous that she may even tread on her own ankles. She smashes, knocks over, turns on, or destroys anything she comes into contact with.

Weekend watchlist: 5 Recommendations On What To Watch this week

Good Luck is the directorial debut of veteran editor Mark Helfrich. Chuck’s central premise has a less-than-flattering image of women. Furthermore, Josh Stolberg’s script is based on the concept of ideas of that era. Essentially, the idea of objectified manhood, or elevating the activities above a frantic marathon.

In some ways, the writing for Good Luck Chuck is both familiar and clever. The picture does have a few good chuckles, most of them come from crass conduct. Laughter will be followed by loud moans in certain cases. However, the conversation is engaging, and the circumstances are conventional and foreseeable (not to say not enjoyable).

My particular issue is that we are denied the opportunity to view the woman with three breasts. There are a few nasty scenes in the film, as well as some visual gags. For instance, a little above her bikini line, one lady has a ‘George W’ tattoo. However, it mostly serves as a presentation for stand-up comic Cook’s charming personality. Nevertheless, with numerous set-ups meant just to satisfy character quirks rather than move the plot, it becomes tedious.

The balance between genres

Good Luck Chuck is an odd comedy that mixes bawdy conduct with sweet romanticism. Because of the disparity between those two methods, the film is fragmented and takes time to find its ground. With Stu’s breast obsession and a compilation of Charlie’s sexual adventures, it aims to appeal to both the male and female markets. The former made me giggle at times, but the latter scared me to pieces.

Charlie, played by Dane Cook, elicits the sympathy that his personality demands. Especially with his ridiculous, outlandish attempts to get Cam to be his. Charlie is meant to be a gallant gentleman who refuses to abuse the numerous ladies that swarm to him. Cook’s performance in this part has a strange and unattractive quality to it, which adds to the intrigue.

Jessica Alba is adorable as the awkward penguin woman. But her attempts at humor are way too frequent. They do give a degree of sensitivity to the role. She turns out to be charming when cast in the proper part. Alba’s restricted range allows her to play Cam with just the perfect combination of kittenish sensuality and complete ineptitude. The digressions are really entertaining.

Dan Fogler’s sexist snarky comments garner a lot of laughs. However, they feel out of place once the relationship begins. The rest of the assistance is simply decorative. Good Luck Chuck probably appeals to the teenage target group, but I wanted it to be more aware of its surroundings. The fact that the movie was only 96 minutes long, it felt much longer. Forcing me to check the time several times.

Editor’s pick: 5 Life Lessons Battle of The Bastards GOT offered us

Good Luck Chuck is not afraid of nuance and style, except when it comes to Alba. In an early montage, Charlie begins to consider the advantages of being cursed. Additionally, there is enough bare skin to be seen. There are just too many teen elemets, a crazy but beautiful girl, cleavage, a pleasant guy with compassion, a comedic stoner, and sex-obsessed companions. Not to mention the indescribably profound teachable moment that sex without love may be hollow and unfulfilled.

If you believe Nancy Mayers is pampering us with reasoning and human relationships, there’s always Good Luck Chuck to bring everyone back to the real world. Most Hollywood filmmakers are lazy; they may rely on stereotypes to produce a picture.

They’d rather churn out predictable fare with a dash of sensuality and nuance than put in the effort to create something that succeeds on numerous levels. Good Luck Chuck has several brilliant concepts. The idea of a guy being unable to have sex with his soul mate could seem to open up a wide ocean of comic and tragic alternatives.

Good Luck Chuck: See it or Skip it?

A high-octane take on the profane, relationship-focused sex sitcom sub-genre. Best wishes Chuck appears to be made specifically for big business. Nevertheless, it is plagued by slightly uncomfortable emotional swings that appear to be less a consequence of plot and more openly meant to appeal to demographic segmentation. The consequence is a hilarious bit of flimsy comedy that sometimes has light, character-driven pleasures. If you want a good laugh on a boring or bad day, this movie is your rescue.