Fight Club: The Most Memorable Dialogues Ever 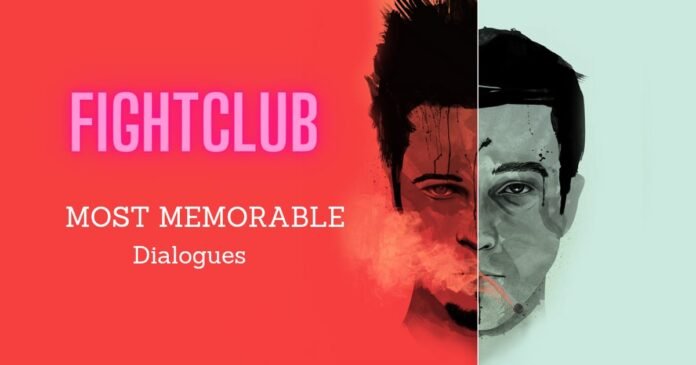 The film Fight Club shaped a lot of young guys. David Fincher’s exquisite “Fight Club” is rebellious and yet oh-so-gratifying in its hideous elegance, providing raw truths in dialogues that are deemed “normal” and delivering an actuality that dares to confront the inactivity of the regular world like so many people understand it.

It doesn’t appear to be attractive or appealing in any manner, even had a ambiguous climax that made watchers go mad. Well, no more, here is the Fight Club Movie Ending Explained for all those who haven’t figured it out yet.

It is, nevertheless, a story about suppressed fury, corporate monotony, fetishistic undertones, and capitalism. Insomnia, cynicism, and the merging of pornographic sequences into family-friendly films resonated with viewers worldwide.

People still repeat fight club lines today since the film is becoming a focal point for navigating masculinity, white-male outrage, capitalism, and gender interactions that all movie fans remember. Here are some of the most memorable Fight Club dialogues and why they are still quotable.

You know how iconic it is even if you haven’t watched fight club. I mean, Peter Kevisnky says it in; To All The Boys I Loved Before (2018). Fight Club is a very secretive organization (so much so that the narrator himself has no idea who’s actually running it). Tyler emphasis on the ‘no shop talk’ policy for the army, not once but twice.

This is not some run of the mill underground fighting ring as the title actually suggests. It’s a serious organization to take down the advertising world. It requires dedication and secrecy. Another reason Tyler is so serious about the secrecy is that he knows a secret that no one else does, and we won’t spoil.

“Advertising Has Us Chasing Cars And Clothes, Working Jobs We Hate So We Can Buy S**T We Don’t Need.”

Phrasing the sentiments of a full generation of people in a monologue, the movie went all out in this moment. This is a classic motivational exposition technique used in cinema. It drives the confidence of the rather doubtful characters in the story; it sets the emotion and logic for what is next to come.

Tyler delivers this iconic speech, and I, as an audience member, was ready to fight capitalism. That’s the effect of good directing and solid acting. “We’re the middle children of history, man. No purpose or place. We have no Great War. No Great Depression.” says Tyler, as he captivates the audience and his army to make some of the greatest changes in consumer history.

“It’s only after we’ve lost everything that we’re free to do anything.”

Talk about being philosophical. This is one of the most applicable dialogues in real life. Although losing everything may be going too far, the sense of no attachment it gets is unmatchable. No home to go back to, no one to look after and no wealth to protect; it is when a person becomes fearless.

In the movie, the narrator loses everything when his apartment is in the wreckage. This is when Tyler says this line. According to Tyler, when you absolutely hit rock bottom, that is the exact moment the narrator let go of all your ambitions, goals and desires. As a result, he started the underground fight club to fight and to survive.

Once you stop fearing your fears, you are unstoppable. Your aqua-phobia won’t stop you from deep-sea diving; your vertigo won’t haunt you. All of this is only possible once you accept the condition of “death.”

In fight club, one of Tyler’s first things is to show the narrator that death is inevitable. It is the end of the story, and no one can skip it. Next, Tyler makes the narrator comfortable with the idea of death. Finally, he gives the narrator the confidence to take risks and stop prioritizing not dying. At this point, Tyler is basically convincing the narrator to start his anarchy against the advertising industry because it is now it never.

“The Things You Own End Up Owning You.”

Don’t get me wrong. Even though the movie ended in dread rather than solace in those banks burning. I still think this line makes sense. Tyler uses it in an argument about the IKEA Culture, and it is a subtle metaphor for all the needs and wants of life. Although, even when the narrator and Tyler achieve their goal, there is more fear of what will happen next than the satisfaction of achieving their agenda. Karma, anyone?

You might also love:9 Awesome Chick Flick Movies Girls would be excited to watch

“You Met Me At A Very Strange Time In My Life.”

Aah, the relatability in this line. Place this statement in any move, at any time (especially during a romantic gesture), and it will make sense every single time. The thing is, we all are always going through something good or bad at any given point in time. And the people that meet us during this lifetime leave a certain impression that indirectly affects our next challenge or blessing.

The narrator meets Marla Singer, the perfect companion to his emotional and psychological state. But alas, at the wrong time. The movie weaves a subplot of romance, sure. But it also ties everything back to the uncertainty of the narrator’s life and his goals. Nevertheless, Marla and the narrator were really good together, no thanks to Tyler.