Fear Street Part One 1994 Review: Not your average horror flick 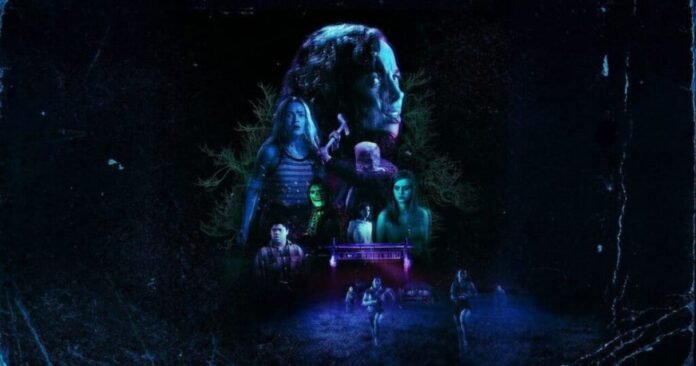 The first installment of the R-rated trilogy inspired by R.L. Stine’s best selling novel, Fear Street Part One: 1994, begins with a callback to Wes Craven’s 1996 horror classic: a phone is ringing, and a beautiful woman(Maya Hawke) answers it. A great dance game ensues with a masked assailant.

Janiak starts with a jaw-dropping opening segment that wonderfully sets the tone for the rest of the film. From the costumes to sets, all the components represent the era with accuracy. Dalton bookstore to regretful floral style, landline phones, and black-light sensitive things, will frighten youngsters of the 1990s. Neon hues adorn the evenings of Shadyside in explosive strikes of greens, blues, and reds, a homage to Fear Street’s famous cover art. Part One begins with a scene reminiscent of slasher flicks from the 1990s: a girl (Maya Hawke), amongst these remaining workers at the deserted Shadyside mall, answers a phone. Then, with a knife, a Scream-style villain assaults her, replete with a black robe and skull mask. She is the killer’s last victim in a bloodbath that has taken the lives of at least six other people.

Part one takes place in 1994 (landlines, AOL, Portishead). Yet, another slaughter has struck Shadyside (AKA Shittyside), this time for the umpteenth time, a resident has cracked and massacred others nearby for unclear reasons. Local teenagers chant the nickname of Sarah Fier, a centuries-old witch who some believe is to a fault.

Simply put, a group of teenagers unintentionally upset the resting place of a witch that, over the years, has developed a sort of killer cult in one form or another. Deena (Kiana Madeira) notices someone resembling the mall killer in the distance. She assumes she is the victim of a cruel joke. However, her brother Josh (Benjamin Flores Jr.), well-versed in the town’s violent history, begins to see the ghost-like individuals as part of a larger pattern.

They get support from fellow laid-back classmates Kate (Julia Rehwald) and Simon (Fred Hechinger), who earn money distributing drugs to other high school students, extending their scepticism toward Shadyside. Everybody in the group is frightened by assassins who appear to have come from a fancy dress party. Still, for some reason, Sam (Olivia Scott Welch), Deena’s former lover who relocated to Sunnyvale, is singled out.

You might also love: In the tall grass, Ambiguous Ending explained in 5 mins! The rest of the tale follows the standard arc of supernatural murderers pursuing teenagers. You know they’ll be picked off one after another in increasingly horrible ways and that the evil forces’ defeat will only be a brief reprieve. Parts two and three of the Fear Street trilogy — 1978 and 1666, respectively — are set up here. A juvenile is found to be the culprit. He worked at the mall whenever the local sheriff shoots him dead. Yet again another example of the Shadyside jinx at work.

These aren’t the murderous tropes that self-aware scary films like Scream and The Cabin In The Woods have pointed out. This group lacks a pure Final Girl, an intimate relations blonde, a drugged screw-up, or a brainless jock. We are given individuals that refuse to fit within cookie-cutter moulds.

For example, there’s the valedictorian and meth dealer cheerleader (Julia Rehwald) and her best friend, the smart goofy (Fred Hechinger). He juggles school and a hard job to keep his siblings nourished. Graziadei and Janiak generate protagonists who are genuine and living rather than familiar or rehashed with such intricacies. When a murderer is on their tail, our hunch pays up.

Is it the same cliche horror? Fear Street is incredible for how good everyone and every cast member is, adding legitimate poundage to the thriller. Of course, an ensemble movie produced by totally overlooked talented actors is as risky as the entire undertaking itself. What’s most noteworthy about Fear Street is just how outstanding every member of the crew is, contributing genuine weight to the scene. But that’s about it; Part One is a tense encounter, though not for the motives you may think. The loud strings-based music, as well as jagged cuts and gruesome kills, deliver an abundance of eye candy.

Janiak’s cast is outstanding throughout all of this terrifying pleasure. Madeira is a fantastic leading woman, combining Alien-era Sigourney Weaver’s fierce aura with a properly angry frown and quivering inner softness. Olivia Scott Welch is a fantastic scene partner. She offers a heady mix of passion and anguish that would seem like an Olivia Rodrigo musical.

The script, written by Janiak and Phil Graziadei, achieves a similar equilibrium here. Pacing its central mystery while also proving extremely good in its informal refocusing of a queer love story. It’s a significant step forward given how LGBTQ protagonists are frequently denied a seat at the table in the horror films. The high-octane slasher foregoes the cushioning of stillness and tension, which can be disorienting. Instead, it swings more toward the horror end of the comic spectrum. Yet horror enthusiasts will hardly blink at the jump scares, while the others may be sorely disappointed more from the unusual young heroes.

Even though the film establishes a rivalry between affluent and impoverished communities, the film’s themes emerge alongside the main action and coalesce before becoming anything resembling significant critique. The story mentions Deena’s troubles with her alcoholic father. We get a peek of Sam’s repressive and traditional mother in broad brush strokes, but there’s no time for that while you’re racing from masked killers.

Although these suspense thrillers get inspiration from Contemporary Literature, the cinematic blood, violence and gore, pornography, adultery, and an unrestricted list of swear words make them R-rated While such explicit information may come across as obnoxious in the wrong hands, Janiak considers what we see and why. The most heinous killings are not only horrific but also heart wrenching since we’ve become attached to them.

Modern horror films and television shows have conditioned us to see the supernatural danger as a metaphor for something more mundane: racism, grief, sexism, drug addiction, and the shackles of societal traditions. Thus, FS94 is surprising because it assumes that if something looks and feels like a misfortune, it is a curse. Stream it on Netflix.