Fatherhood Review: A Father’s Love, Loss & Everything in Between 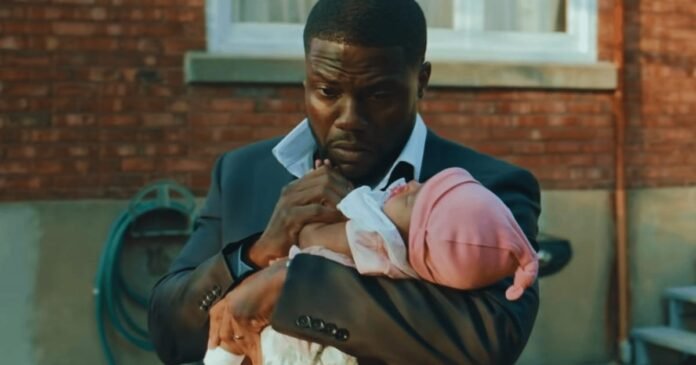 Family drama, focusing on the father. I cannot guarantee you won’t tear up because I did. We will go through a checklist of subjects that “Fatherhood” intends to cover in addition to the hardships and tribulations of single parenting. In sequences that appear hurried and disorganized, issues including gender-based apparel, a dearth of support groups for single fathers, and balancing work life lessons are given perfunctory special attention.

Directed by Paul Weitz (also directed About a Boy and American Pie), Fatherhood follows the life of Matt Loeglin (Kevin Hart) and his daughter Maddy. We learn at the start, through flashbacks, that Matt’s wife Liz passes away due to childbirth complications, and he has the responsibility to take care of their child Maddy. The single dad struggles with folding the stroller, changing diapers and installing cribs in the back of the car seat. On top of that, he has to tolerate Liz’s mother (Alfre Woodard) and shares some tension with her. Although they ignore it at the start, the friction between the two escalates into a conflict.

How is Kevin Hart?

Kevin Hart takes on a dramatic role of a single, grief-stricken father who has just lost his wife and raises his newborn on his own. He is certainly better than you imagine him to be in such movies. Although, is he blind? Maybe. But he packs a few surprises with a hint of sarcasm and some tears.

Too good to be true?

Based on a memoir (Two Kisses for Maddy: A Memoir of Love and Loss) by Matthew Logelin, the feature film seems predictable at most of the points. Somehow, Matt juggles his work and Fatherhood without getting fired (instead gets promoted, eventually), and he has a solid love life with his girlfriend (DeWanda Wise). Matt is a true protagonist, and the movie indeed protects his personality, and there can be no judgement on him because he is a single dad trying his best.
It seems far from reality but makes it an easy watch.

The plot seems to be going in every direction that there is and feels forced in a few instances. It could be a tad shorter by 20-25 minutes. The scenes linger for a long time and could have been reduced, along with some subplots.

The most crucial relationship, which is the basis for the movie, Maddy and Matt both grow up together while one grows up as a child, the other grows up as a single parent. Matt loved his daughter and worked tirelessly to be a good father to her. Maddy always gets two kisses, one from her dad and one from her mother, which is a very touching ritual in their relationship. It signifies the love Matt has for his wife and child. Matt is a clueless parent but juggles his way out in every situation and never gives up. He learns the lessons of patience, resilience and selflessness through parenting, and other parents can take notes for the same.

While Matt becomes a widower and a parent altogether, Marian(Liz’s mother) and his own mother Anna urge Matt to move back to Minnesota, where the baby will have a family and Matt won’t be alone. But Matt decides to stay back in Boston because that is where his friends and work-life are. He is adamant about the grandparents moving out, insisting on raising his child on his own. But Marian questions his parenting, constantly judging him.

The relationship blossoms by the end, in which both parties learn something from one another, and there is newfound respect among each other. It is a beautiful reconciliation that makes you cry a lot. Matt also learns a few lessons on parenting from his mother over a cup of tea or two. None of the grandparents believed in him, but he raised the child beautifully, and Marian is one proud granny.

Matt has two friends, Oscar(Anthony Carrigan) and Jordan(Lil Rey Howery), and both seem a bit odd at the start. While Oscar complains about the tuna casserole at the funeral, Jordan compares Matt’s losing his wife when he got poison ivy.

Their friendship becomes more lovable when Maddy enters the scene. They have fun with Matt and Maddy in child-appropriate ways, like playing poker with cookies. Jordan’s soft spot for Maddy is evident when he cries seeing Maddy walk for the first time. And Oscar helps Matt find a girlfriend in his own not so subtle way.

Even though both his friends were eccentric, they never left his side during hard times, which is how friendships should be. On the other hand, Anthony Carrigan and Lil Rey Howery are given less than they can. Their characters could have been so much more, but they remained stagnant.

The film addresses issues like rising Black maternal mortality in the US and breaks the stereotype of Black parenthood. Black fathers, especially in movies, are absent in the child’s lives and are shown to be either involved with drugs or spend time in jail. But this movie shows them in a positive light.

Matt gives Maddy a safe space to express herself and her opinions. She doesn’t feel comfortable in skirts, and her father is right there with her not to follow the school’s ‘stinkin’ rules’.

It also highlighted complications of having a C-section birth, like developing pulmonary embolism. Tennis star Serena Williams opened up about her struggle with pulmonary embolism after giving birth to her daughter. None of the doctors believed her that she was struggling, and she had difficulty convincing them otherwise.

I checked the movie genre before watching it, and it turned out to be a comedy. I sighed, thinking it won’t be the typical, sympathetic take on a single dad. But I was wrong. Five minutes into the movie, and I am bawling. It turned out to be more of a drama film than a comedy, but I am not complaining.

I appreciate the love that single fathers(or fathers as primary parents) are getting due to this movie. They are underrated and deserve representation in the media as much as mothers do. There is little support for them, and this film gives them the help they never received from others.

Fatherhood is a heartwarming movie filled with the tears and joy of being a single parent. It is a one time watch, and do not forget to keep a pack of tissues because someone will be cutting onions.