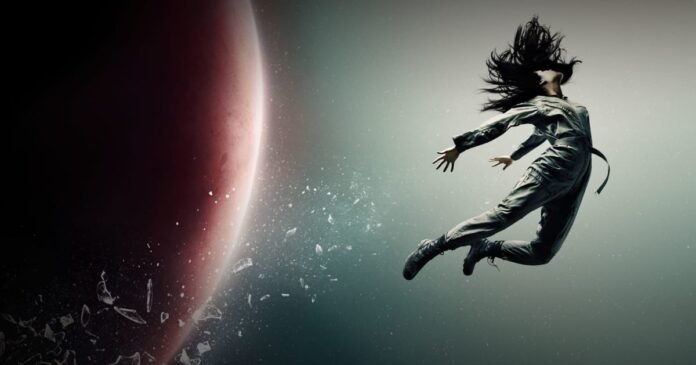 The drama offers an extraordinary feeling of scale, with a well-thought-out future society that mirrors our own, great production standards, and characters that speak and behave like real people. The Expanse combines sci-fi and investigative noir themes into an aesthetically pleasing totality, yet it requires a few installments for the plot to pique viewers’ interest. The series contains a topic of modern political significance coupled with its heroes’ and their characters’ writing, which is commendable.

It is an American sci-fi television series based on novels that go by the same name. A futuristic series where humanity is shown to have colonized the Solar System. It follows an incongruent group of people, inadvertently unraveling and placing themselves in the middle of a cold war brewing amidst the conspiracy that threatens to break apart the system. A series that pays special attention to developing its visuals to make them look surreal. It brings political machinations into a sci-fi narrative, creating characters as the series pans out. This television series was much of a treat for the eyes and the mind.

The franchise has released 5 seasons till date. And here is a detailed break down of each season.

A UN executive is responsible for preventing a full war break-out between Earth and Mars. While on the other hand, Joe Miller, a Ceres police detective is ordered to find a missing woman. Her name is Julie Mao and she is the daughter of Jules-Pierre Mao. He was the inventor of the artificial ships that are accused for destroying space freighter Canterbury along with a Martian navy ship, Donnager

Setting the central scene of the series is the series of events following the escape of James Holden, Amos Burton, Naomi Nagata, and Alex Kamal onboard a Martian gunship, Tachi. Which they renamed to Rocinante. The series ends with the mass killing of humans, including Julie, on the asteroid EROS, due to a biohazard discovered by Joe Miller and the onboard crew Rocinante.

Similar Read: 7 TV Shows/Movies like Money Heist that you will love

A Martian marine, Bobbie Draper, has to fight an inhuman figure on Ganymede, which makes him later be known as a protégé of Avasarala. There is also a “protomolecule hybrid,” that anti-hero Jules-Pierre Mao developed. The crew tries to help a father in finding his daughter. While doing so, they encounter the same inhuman creation of Jules-Pierre Mao and kill it. A research ship goes to Venus to investigate the clash of Eros. But the proto molecule completely disassembles the vessels when they try to enter into its atmosphere.

We face much of a shock in this season. Since the Earth and Mars send research ships to see what is going on near Venus. As a result, the UN is assembling to unite nations. In this case, planets are declaring war. And the deadly protomolecule forms a structure, THE RING, which takes an orbital position beyond Uranus.

This RING opens up a land rush to other solar systems with habitable worlds just like their own. They stop the refugee ships from the Belt and the excess population ones from Earth. Before that, the crew of Rocinante goes to investigate an EXO-PLANET. It is set up by private military support and Belter refugees. This occurrence wanes down the efforts to terraform Mars as ready-made hospitable worlds are up for the taking.

In the last season after docking their ship at Tycho Station, the crew of Rocinante was pursuing personal missions. A deadly conspiracy looms as a threat over Earth. We see Draper and Avasarala investigate the ties of the Martian’s military to the growing menace, which is the rogue faction of BELTERS. And the Belters are led by Marco Inaros, a rebel leader from a Belter fleet.

What to Expect in the Expanse?

Many people on the internet seem to find this series dull, and they feel like giving up after watching the first two episodes. This series requires patience, it is not for an audience that demands fast-paced shows The production value and set designs will leave you. The series is as surreal as believable. The first season is slower than the rest, but that is a necessity for proper world-building.

I promise you, If you stick through till the end, it will leave you mesmerized. It is unlike Star Wars, full of unreal fantasy. No offense to fantasy lovers, but this series leaves you with grounded pragmatism pondering over the what-ifs.

Is it a binge-able show?

The Expanse is not an easy series to watch, but it is a series that will give you all you can hope for in a science fiction mixed with soap opera series. The stakes get higher as the show progresses and it is difficult to pause or look away. It is no longer the slow season one you were so ready to give up on. Truly at first glance, the characters may feel too disconnected and the plot not clear enough. But when you go deeper down this roller-coaster of The Expanse, all you will feel is excitement and exhilaration.

The series develops into one with stunning special effects, working with a great storyline. These amazingly realistic characters bring the story to life, giving you the best cinematic experience on your screens. It is full of emotional gravity and shows how even in a world so different and surreal, every action still has an equal and opposite reaction. Available on Amazon.

Themes of the show

Every scene happens to be relevant to the developing storyline and stakes in the story. This series is consistent in its delivery and has a very thoughtful execution. The series isn’t flashy. It is grimy and utilitarian, just adding to its relatability for the audience, unlike most sub-par series of this genre, which tends to over-polish space and forgets the little details.

As the audience, you get what you expect, let us face it, space isn’t all beautiful. It is deadly and vicious in its simple beauty. This series is the one to watch out for. It is creative, thoughtful. The show makes you question the nature of humanity and our beloved nature. The expanse has all it takes to satisfy your sci-fi, soap opera hungry palates.