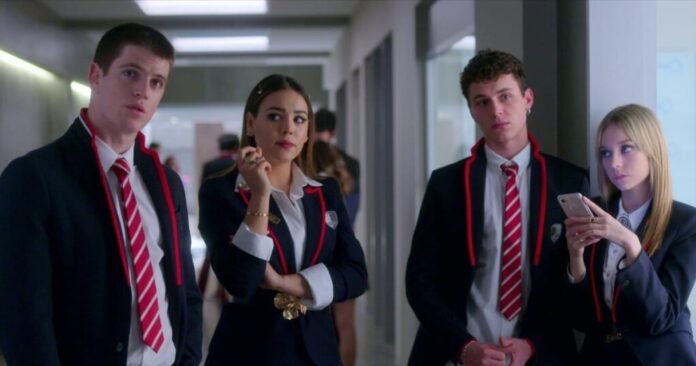 A series in town that is spicy and sophisticated, who wouldn’t love it. The outrageous Spanish teen drama slash murder mystery, Elite, premiered on Netflix on October 5th,2018. It begins and somewhat ends in one place. Las Encinas, the private school for the rich heirs and heiresses of fortunes passed down generations.

Elite serves to you the most sketchy plot line, raucous pool parties, fights in the locker room, and “beautiful” people set on stabbing each other in the back. Each season in the series brings to the table a new sensual, off-your-rocker murder mystery. The motive is always unknown, some character murdered, or a sudden disappearance.

But, unlike many other series with murder mystery plot lines written all over them, this soap dishes to you a lot more than just rich teens and their first-world problems. Every character is given equal importance, and there is no stone left unturned in letting them braise in the story line and develop their characters.

What does the soap show?

This Netflix original follows a band of private school kids with privileges one could only wish for. However, when there is money and power, drama is sure to follow. Murder in the school’s pool is just the beginning. The show grows more and more salacious as it progresses down the plot twists and the drama. The series of murders and who-done-it investigations are what drives the performance with a stellar ensemble of the popular kids and bullies Lu and Guzman.

Privileged Polo, entitled Marina, marchioness Carla and everyone in between gives us what we crave. The kids who just happen to have become private school students.

The class clown Christian, lonely boy Samuel and intelligent Nadia. They help us relate to the series and keep the drama grounded. Add to it the sappy romance of Ander and Omar, and you have the perfect mix of teen drama. The kind with outrageous mysteries surrounding the characters’ lives. Stream it on Netflix.

You might also love: Why was Loki a variant for time traveling but not the Avengers?

Elite: Not just a teen drama, I offer more.

1. A story line that makes you want to stay

Teen drama lovers can relax, Elite may be a suspenseful murder mystery, but it will give you tea that will make you go bonkers. And to all the lovers of mystery, this series will provide you with something to remember. Elite gives you (teen) drama and mystery and makes absolute sense. What else could you possibly want?! It is coherent, exciting and you stay hooked until the last, wishing you had more to binge. A story that explores personal lives and mixes it with the who-done-it investigations. It gives you enough eerie vibes to suffice for ages.

Further Reading: Is Elite the best Netflix has to offer in the YA section?

The plot line addresses the nuanced inner conflicts of each character and makes them more human to the audience. It fights the stigma surrounding how the rich and privileged never have troubles in their lives. It shows us how each character in the series is battling their inner turmoil. The personal struggle mixes with adhering to the rules of their parents and the school. The plot line has added poignancy all because of this added humane effect to all characters.

3. The use of flashbacks and flash-forwards

Throughout the story line, the series explores each character while investigations take place alongside. With no one left unsuspected, the plot brings out the true nature of each character. At the start of the series and you see a girl murdered in a pool. Cut to flashback to the months leading to the murder, sometimes showing the investigations on who-don-it?

You almost immediately get hooked on the personal lives of these characters, wondering who is the murderer. To be honest, teens already have enough drama in their lives. Adding into it the intrigue of murder and investigations. The use of flashbacks and flash-forwards makes you imagine the best and the worst. Even though this satisfies your intrigue, it leaves you wanting more.

4. Toxic masculinity at its best (or worst)

Guzman the popular kid and the resident bully. This bad boy seems to hate the “outsiders” a little too much, but boy-oh-boy, how do you rationalize it when your father is the one that was at fault. However, when we start the series, he makes you want to hate him. For instance, he is a privileged anti-hero, manipulative, rude, and entitled. But as the show goes on its way, Guzman seems to peel off his layers, and lo and behold, look what we find out. In addition, he is overprotective when it comes to his family, he cares about his friends to a fault, and last but not least, he manages to fall for the girl he wanted to humiliate. This character indeed has grown all along the journey of the series, and we are all for it.

With its classy and sophisticated themes, Elite also manages to throw light on actual social issues in a very refreshing way. Similarly, It shows how teens already go through so much. figuring out who they are while navigating the shark-infested halls of their high schools without adding to it preconceived notions and expectations from them. Nadia’s fight for her hijab, even when she was about to face expulsion, is one of the most influential and empowering moments in the series. The series throws light that classism, racism, xenophobia, and many other cultural norms and restrictions are not restricted to specific cultures and are present everywhere.

In short, we can say that Elite is that category of teen drama that is fun, sophisticated yet it is not mind-numbingly confusing for the audience. With a dash of mystery on the dark side, with the saccharine sweetness of love. This show gives you a lot more than murder mysteries and teen drama. It attempts to show the pain of being a teen in a society with over expectations and notions that restrict you from finding your true self. This nail-biting is as out there as it is relatable. It is more than just a guilty pleasure, but be warned if you don’t know Spanish, subtitles are all that can save you.