Elite Season 4 has literally just hit Netflix and already the buzz about Season 5 is flying high. Because why not? This show about rich students of a prep school in Madrid, Spain is juicier and tenser than Gossip Girl and Riverdale combined. So, if you have already binged on season 4, then check out all these fresh hot details of Elite Season 5 below.

Is Elite Season 5 Officially a Go?

We have just one word for your question: Yes! Netflix not only has renewed Elite for season 5, but they have also done it well before the release of season 4. If you are not yet aware, in February 2021, Netflix used its official social media accounts for the announcements. See for yourself! 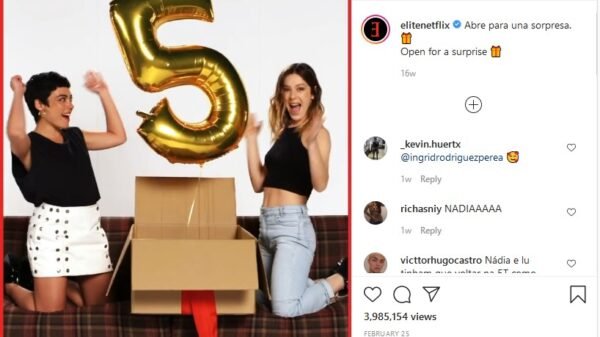 That’s right, folks! Elite Season 5 not only has been renewed, but its production also has officially begun in Madrid.

Elite fans, get ready for more because the show has been renewed for a fifth season!

(and before you ask… no, Season 4 has not premiered yet) pic.twitter.com/AUkFUcTwAa

Similar read: Shadow and Bone vs. GOT, Are they so different?

Is There Any Trailer or Teaser Out Yet?

Unfortunately not yet. The show has not released any trailers or teasers for season 5 yet. Maybe because you first need time to get to know what happened in season 4! Hopefully, we’ll get to see something very soon! However, one thing is clear, Elite is not ending anytime soon. Showmaker Carlos Montero in an interview with Spanish-language news site BLUPER told, “I want Elite to be Netflix’s Grey’s Anatomy”. He added, ‘I am clear that I do not want it to end.” Now that lovely Elite-fans, we call it good news indeed.

What Would it be About?

According to Entertainment Weekly, Elite Season 5 will be the continuation of season 4. “Elite Season 5 will conclude the school year that begins in Season 4, which introduces a host of new privileged students.” This also means new characters/students will be transferred mid-school season. Though it’s not yet clear what exactly will happen in season 5, one thing is clear: there will be more thrill, suspense, romance, drama, and maybe a squashed friendship and relationship or two on the horizon.

You might also love: #10 Amazing Rom Com Movies on Netflix You Must Watch [2021]

Who from Elite Cast Can We Expect in Season 5?

#Elite has been renewed for a fifth season and two new actors have joined the cast:

As we know season 5 will be the continuation from Elite Season 4, Samuel, Guzman, Omar, Anders, Rebeka, Phillipe, Ari, Mencia, Patrick, and Cayetana will be returning to Las Encinas once again. However, according to Netflix’s announcements, two new characters have been added to the existing cast. Argentinian actress Valentina Zenere and Brazilian actor André Lamoglia.

Now the Million Dollar Question: When Will Elite Season 5 be Released?

The Elite franchise releases only one season every year. However, since the production of Season 5 has already begun in Madrid, we are hoping the new season will be coming out in early 2022. So while you wait, have you read our coverage on Elite Short Stories? If not, read it here.

Are you excited about Elite Season 5’s release? What are your thoughts on Elite Season 4? Let us know in the comments section below. Sayonara, until next time!