Don’t Look Up: Now we can sit Tight and Assess 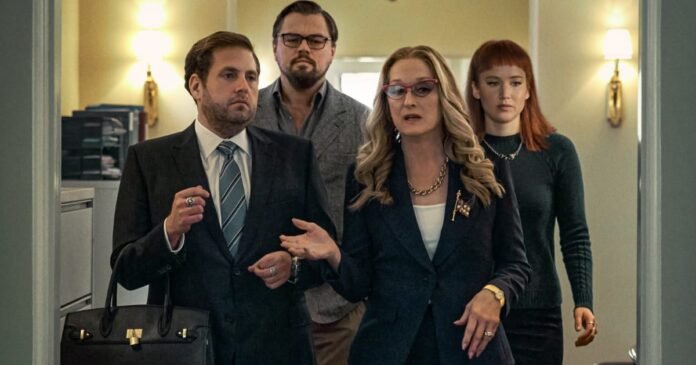 Just look up, there is no place to hide

Just open your eyes and see our dying Planet Earth; the reverse mode of climate change, floods on all the parts of the world, and the killer deadly pandemic. We are stopped, stopped for 2 years, yet the powerful system says we can sit tight and assess. Don’t Look Up, speaks about the present scenario of the world. Is this a satirical movie? No, Not at all, it is not like that; the inner thought Adam Mckay and David Sirota wants to convey is something more.

Don’t Look Up is satirically packed with real events where we can see the unresponsible act of the government, the media, and society. Adam Mckay tried to mock the entire system that neglects the ecocatastrophes.

Should you indeed want to see how tightly the exploitations are mentioned in the movie…. ok then have a look down to know what the movie is really about.

Discovery of an unknown Comet, large enough as Mt Everest is heading towards Earth. A Ph.D. candidate, Kate Dibiasky is the one who discovers the unknown planet killer. Her Professor Dr. Randall Mindy calculates how long it will take to hit the planet. The calculations ended up giving the result that the entire mankind, basically every species will be extinct in 6 months and 14 days. Along with NASA’s Planetary Defence Coordination office head Dr. Teddy Oglethorpe, Dibiasky and Prof. Mindy meets the American president Janie Orlean and her son Jason Orlean, they neglected their findings saying we can sit tight and assess.

Mindy and Dibiasky decided to tell the information through the media. They were invited to the Morning Talk Show hosted by Brie Evantee and Jack Bremmer. The hosts treated the topic as funny and the angry Dibiasky shouted terrifically that made widespread online mockery about Kate. The fact they wanted to share got little attention in the public. The people are more interested in the relationship of pop stars.

Meanwhile, Madam President was involved in a sex scandal, to divert the issue she announces a project to blow the Comet Dibiasky with decommissioned space shuttles and satellites loaded with nuclear explosives. The mission was turned back by the influence of a Billionaire Peter Isherwell CEO of tech company BASH who suggested a new mission would help to mine the valuable minerals from the meteor to be brought back to Earth that provide wealth. He assures that his technology can assure both the extraction of minerals and destroy the meteor.

Time passes by Comet becomes visible from Earth. Mindy Dibiasky and Oglethorpe organize a protest against Orlean telling people to Just Look Up. On the counterpart, Orlean launches the Don’t Look Up campaign. BASH’s attempt to break the Comet fails one by one. People realize the Comet is going to hit Earth. Isherwell, Orlean, and other elite people get into cryo chambers to land on the nearest Earth-like planet. Earth is destroyed leaving back Jason with her mom’s bag.

It is a powerful depiction of society’s response to scientific warnings. A comet that threatens to destroy is an intentional allegation of the climate crisis. Film articulated a sense among climate activists of having their messages fall on deaf ears over many years. Critically bringing forward the under covering nature of media. The movie tried to depict the powerful hands using the power for their family welfare. They act as deaf to educated people who want to save Earth but the government system functions only by hearing the unrealistic methods offered by Cooperate hands. Activists and climate scientists who truly understand the gravity and urgency of the climate crisis.

Many awards to his baggage, the director Adam Mckay tried to express the political scenario in a satirical way.

He twitted about the debates going on about Don’t Look Up like this ‘Loving all the heated debate about our movie. But if you don’t have at least a smaller ember of anxiety about the climate collapsing I’m not sure Don’t Look Up makes any sense. It’s like a robot viewing a love story. Why are their faces so close together? ‘
He aimed to reach the people the idea of climate collapsing and how our leadership is handling it. When emergencies are colored in comedy it will have an impact that’s how it works out.

Maybe that’s the reason why he co-writes it with the American Journalist David Sirota. He is a man with many faces, a writer, Political spokesperson, worked as a senior advisor and speechwriter in the 2020 Presidential campaign. So it is very clear that they tried to convey the real incidents happening. In the movie Don’t Look Up Benedict Drask is giving a speech, Jason says I wrote the speech, that may be the real-life experience of David Sirota. Likewise, many scenes in the movie can be related to real persons and real incidents.

David Sirota asked Adam Mckay to use his superpowers of humor and writing to create a climate change movie. Sidelining of climate crises news by the media, and the authorities ignoring the warning of climate scientists is the thread that made them think about the movie.

Madam President says in the movie that people will not believe when things are said in 100% chance of dying. See that’s how the leaders think about society. True leadership only comes when we are rooted in society. Otherwise, the heartbeats of society don’t reach the ear of the administration.

When Dibiasky, Prof Mindy, and Dr. Teddy Oglethorpe informed the Madam President about the Killer Comet, without taking any measures the response was we can sit tight and assess. This type of situation happens in our society where neglects to act in emergencies. They only act if they get any benefits. In the movie, the director tried to explain how the administration act in crises

May I say something Mr. Isherwell

Mr. Isherwell is the representative of Cooperate company’s in the movie. He is the CEO of BASH Liif, a mobile company. In the launching scene of BASH, everybody is asked to behave in a way, to avoid direct eye contact, negative facial expressions, no questions. The film is questioning the billionaires who involve in the matter of the state by giving Big offers to the leaders. In the scene a kid is asking May I say something, He abruptly stopped the kid in the same way the society is kept mump.

Snacks and water has been charged

In one of the opening scenes when astronomers and NASA head were waiting to see the President, the three-star General gives them snacks and water, for which he charged money. The snacks and water are free in the white house. Bribery is openly shown in the movie with the particular scene

Jason is the representative of all sons and daughters of those in power. It’s there in every country, the kiths and kins will be tasting the fruit of power. You can see the very first scene when Jason is introduced is with a lady’s bag close to his leg, and he is always seen with the same bag. The end tail of the movie also shows Jason with his mom’s bag. The small bag represents nepotism.

Editor’s Pick: #9 Wonderful movies like Knives Out you don’t want to miss

Don’t Look Up ensemble the fantastic actors like Leonardo DiCaprio, Jennifer Lawrence, Meryl Streep, and Jonah Hill. All have done their part to enact their characters to get the reach. But a special mention should be given to the acting of Dicaprio and Jennifer.

The ever-charming Leonardo Dicaprio plays the astronomer Prof. Randall Mindy. Dicaprio delivers the nervousness of an astronomer who fears how to express the fact the world is going to face. Another awesome performance we should mention is Jennifer Lawrence who acted as a Ph.D. candidate. She shoulders the pain of the character outstandingly. In many more situations, she is outbursting, losing her composure, trying so hard to make the people believe the reality.

Want to experience it or not?

Real or not, it is true that comets pass closest to earth. It may be a coincidence that the recent comet that passed nearby earth is named Leonard. So it may happen to earth as the asteroid hit million years ago that led to the extinction of dinosaurs from Earth. I should say experience it for a while to know how it feels when there is no Earth. And if you still don’t like it, I will quote the Director’s word, ‘if you don’t like my movie that means you didn’t get it….’

So you got it or not.

Trending today: 5 Best Political TV Shows you should watch in your lifetime