The curious case of Emily and Ross; how it shaped friends 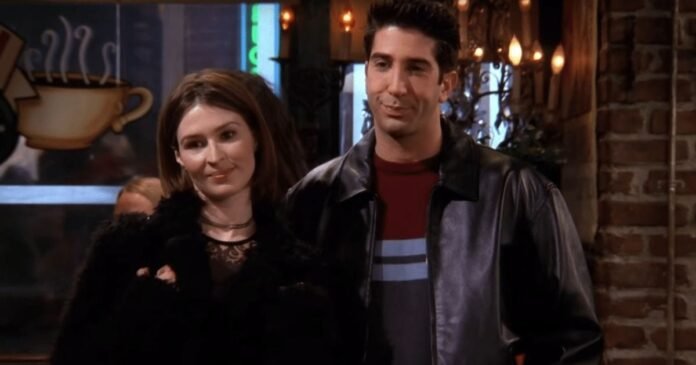 Imagine this: You take a trip to NYC from London to meet your boring uncle and meet this guy. You have such a connection with him that you end up in Vermont on your first date. You even break up with your boyfriend back home. Things are happening so fast that they seem crazy. You know he is the one. Suddenly, you get engaged and decide to marry in four weeks.

Then, he invites his ex-girlfriend to the wedding and says her name at the altar. Later, you decide to meet him at the airport to patch things up and have a decent honeymoon. And there you see her again, boarding the flight, for your honeymoon, with your husband.
Emily Waltham endured this.

All six of the Friends were great, but did Emily really deserve this much hatred?

Emily is a sweet, caring, and supportive person. She develops trust issues after the drama at the wedding. She starts mistrusting Ross only after he says Rachel’s name at the altar. Ross and Emily have a great chemistry until Rachel decides to ruin it. Rachel had always been shallow and self-centered. She only seemed to fall in love with Ross when he was with someone else. Julie, Bonnie, Emily, the list is long. The moment he became unattached, she lost interest. Charlie Puth correctly puts it, “You just want attention. You don’t want my heart.”

It is also true that Emily got so much hatred just because she was not Rachel. She seems like a barrier between the Ross and Rachel love story. Even if Emily and Ross had found a way to work their relationship, people would have still found a reason to hate her character. Although Ross and Emily seemed to rush into things very quickly, they did make each other happy.

Timing was an issue

The show’s creators hint that Ross and Emily are destined to doom from the start, but because of Helen Baxendale’s (the actress that played Emily) real-life pregnancy, they were forced to speed to the end because It would be interesting to see their marriage if none of the ‘Rachel’ drama happened, but knowing Ross’s forever feelings for Rachel, Emily missed a bullet with this one.

When Emily asked Ross to stop talking to Rachel, it was a justified request. Even though Rachel and Ross kept the narrative of “We’re just friends,” we know how it turned out. They were always going to end up together, and Emily saw that before anyone else did.

Most people want their partner to be happy and have a social life that is separate from their relationship, but that does not have to include an ex-girlfriend, which Rachel was. All of the main six characters are friends for a long time, and the situation, so the situation seems complicated as Rachel lived with Monica. But Ross had enough Friends.

All of the Friends said they hated Emily and found her manipulative when she wanted Ross to stay away from Rachel. Although, Emily willingly left her life in London- her job, her friends and most importantly, her family. It is a big deal to move to a new country and start your career from there (the show glosses over her career, obviously). And all she wanted was a drama-free life away from that complicated ex, and that is entirely reasonable.

You might also love: Why is everyone talking about Greys Anatomy?

As season four progressed, Rachel Greene regressed. Late season four, Rachel Greene was so cringing that she became unwatchable. The whole story arc with Joshua was a cringefest. Rachel just wasn’t over Ross but desperately wanted to be. She tried to rebound with Joshua while Ross and Emily moved too fast in their relationship. She seemed so out of character, wildly when she threw the fake party and tried to kiss Joshua and ended up kissing his leg. Clearly, there was no chemistry between them, but she just could not be alone while Emily and Ross were so in love.

I can also justify the non-existent chemistry between Rachel and Joshua because Jennifer Aniston (Rachel Green) and Tate Donovan (Joshua) were in the midst of breaking up in real life. The final nail in their on-screen relationship happened when Rachel opens the door to Joshua, wearing a wedding dress, saying, “I do.” “Well, apparently he scares easily”- Rachel Green.

Rachel not only ruined her own relationships but Ross’s too. Before Emily, Rachel sabotaged the relationship between Julie and Ross. Julie was so much more compatible with Ross than Rachel could ever be. She was a paleontologist as well, and Ross had finally gotten someone to talk about things that interested him. Alas, she was not Rachem (pun intended).

Bonnie was Rachel’s next target. Rachel is conflicted about her feelings for Ross but still did not hesitate for a minute to ruin his relationship. She made him choose between her and Bonnie. And Ross chose her. Obviously.

The constant case of hatred towards Ross

Ross was not far behind in pettiness too. He was too controlling and jealous when he was with Rachel. For him, Rachel’s job is not to be serious. He decided not to get the drunk marriage with Rachel annulled. For God’s sake, Ross made a list comparing Julie and Rachel.

Honestly, Ross deserves all the hate that he gets, and on the other hand, David Schwimmer deserves all the appreciation for playing this character.
When you compare Rachel and Ross, both of them did some questionable things to each other and to others. But by the end of season ten, it fitted to keep Ross and Rachel together, given their history. Their characters had grown so well, and the audience deserved to see a happy ending after almost seven seasons of building up the tension between Ross and Rachel.

In contrast, characters like Emily suffered the brunt of their silly actions in Friends. And Emily deserved better. Period.