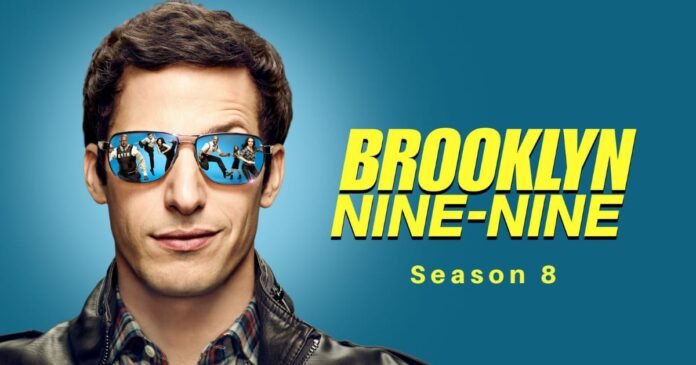 If you say ‘noice’ and ‘toit’ then you are a true Brooklyn nine-nine fan. One of the best TV comedies in terms of writing and acting. Brooklyn nine-nine premiered in 2013, and as it’s onto its season 8 (final) today, we can’t help but be nostalgic.

What is Brooklyn Nine-Nine?

B99 (as fans call it) is a cop procedural comedy from the creators’ Dan Goor and Michael Shur. The story follows the detectives of the 99th precinct as they go about detecting their way in life. Jake Peralta (Andy Samberg), a New York City Police Department investigator in Brooklyn’s hypothetical 99th precinct, frequently disagrees with his superior authority, Captain Raymond Holt(Andre Braugher), who’s really serious and tough.

Michael Shur is responsible for some of the most successful comedies of this era. Namely, The office, Brookly Nine-Nine, Parks and Recreations, The Good Place etc. His sitcoms are often workplace procedurals that add a fine mix of comedy and drama to the characters’ lives.

The last season of B99 initially dealt with Captain Holt’s demotion to a patrol officer. The detectives had a hard time adjusting to his position, and it made for some hilarious moments. However, after the untimely death of his enemy, Madeline Wuntch, he soon restores his captaincy.

Later, the season divulged into Jake and Amy getting pregnant and navigating police work with this responsibility.

Jake and Amy agree to begin trying for a baby. And after six months of trying, they learn they’re going to have a baby boy. Holt assigns Charles to one of the newly formed task force. In that process, we meet Captain Holt’s friend Dillman. In the end, The time Amy’s water breaks, Brooklyn suffers a blackout. Amy skillfully leads blackout tactics while Jake and Charles apprehend a gang of bank robbers responsible for the city’s turmoil. Jake makes it to Amy just as she delivers their son, McClane “Mac” Peralta, with the support of their coworkers.

Amidst the unlawfully “death” of George Floyd, the public looks at the police officers in a different context. The writers of this show acknowledge that and scrapped four fully written episodes of season 8. The idea is to make the show more aware of real-life problems. I mean, it’s their last easily; they could have easily shown the precinct in denial of any real-world problems and bowed out in style. But they won’t, and that is the brilliance of Goor and Shur. They don’t take the easy way out. Previously too, the show’s writers have successfully managed to bring to light some heavy issues intertwined in humour. That is why this show is so loved!

Weekend watch list: Dip your snacks in these amazing shows

In the cold opener, Brooklyn Nine-Nine introduces Covid as the show’s first guest star. The world has changed a lot since the Brooklyn Nine-previous Nine’s episode, which underestimates the thickness of Terry’s pecs.

The opening episode clarifies that the Nine-Nine will be confronting topics like police brutality and systemic racism full on. That’s not the only thing the show establishes. Rosa Diaz announces her leaving the force for good (They mean it, really), and I almost stopped watching it at this point. One of the most clever aspects of the season opener is how open it is to look in the mirror. Rosa is just there to look angrily at Jake as he lags through hot sound bites.

Nevertheless, it made some content when Jake takes the police brutality case Rosa is involved in (as a private investigator) all about himself. But, once again, his bias clouds his judgement, and he does not understand Rosa’s point. Jake and Rosa finally work out their conflicts and find crucial evidence that implies police wrongdoing. However, they are savagely taught how tough it is to punish corrupt cops. In the middle of all this, they also establish the big bad of this season; The obnoxious police union representative.

Apart from this, we see Captain Holt dangling in his relationship with Kevin (so much bad news in one episode) and Amy returning from her maternity leave. Boyle is trying to be as woke as possible and understand the public brutality angle from various podcasts. Charles is the ideal personification of the well-intentioned but misinformed friend. He is adamant in his commitment to Black lives and rights while also engaging in social niceness and overall Charles much-ness. It’s a lighter take on what this season’s underlying themes may be.

In one of the series’ best scenes, Andre Braugher describes how difficult it is to be a Black man, a part of the police force, and, with COVID, just a human, in general. It is what has affected his relationship with Kevin in totality. The writers masterfully blend problems of shifting relations into three different storylines, with Andre Braugher delivering the show’s biggest emotional punch in a brilliantly performed scene (and a few passionate ones from Stephanie Beatriz).

For any die-hard fan of the series, the season start is ‘noice’ in terms of humor and ‘toit’ in terms of the challenges it focuses on. So there is no-doy in telling the show’s fans that it’s the last ride (title of your sex tape), so there is no point and sense in missing it. Really, there isn’t. As for the show in totality, the Michael Shur universe is impressive as a whole and even as its stand-alone comedies. Since binge-watching his creations, I sincerely hope there is a cross-over with The Office, The Good Place, Parks and Recreations, Brooklyn Nine-Nine and Arrested Development as soon as possible.