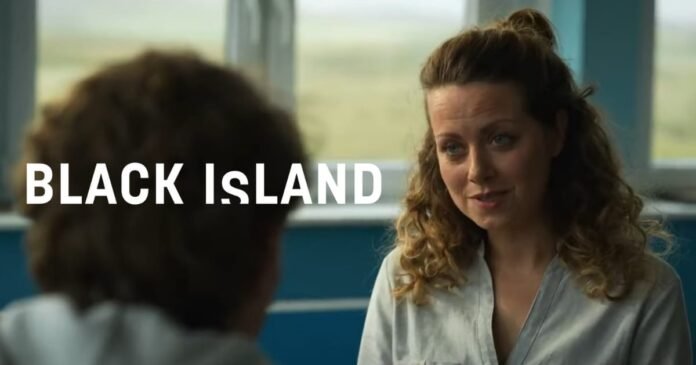 The Black Island is a dramatic thriller featuring a small island village with a terrible past. When a newcomer rekindles the curiosity of the town’s youth, they are unaware that they are part of a greater game. Was Jonas’ family somehow participating in Hannah’s mistreatment? There are far too many questions, and no one but the plot itself can address them. Is the 104-minute duration worth it? Let’s have a look into Black Island review and plot overview!

Black Island begins by fabricating an aura of mystery. There’s Jonas, who is also an orphan, with the exception of his grandpa, with whom he supposedly has a strained relationship. In reality, A lady is mauled and killed by a dog at the crime site. A woman is standing nearby who is staring at her with disgust. The same woman stares upon the deceased woman’s child and daughter-in-law with hatred, and they, too, suffer. We don’t understand why and how the dog killed Jonas’ grandma or even why she murdered Jonas’ parents. The dilemma is genuine.

Anyway, Jonas stays with his grandfather to avoid leaving the island, and everything appears to be well a year later. However, Jonas and his grandfather have a strained connection as well. There were definitely issues with his father and grandfather, which came from his conservative attitude toward writing, something Jonas adores.

A fresh young German teacher, Helena arrives and blows Jonas’s world inside out. She’s laid-back and stands out from the crowd — she’s the groovy professor. Helena appears strange; she does things that people don’t regularly do, and she has a creepy vibe. Helena acknowledges Joans’ writing abilities and nurtures them. However, she also takes advantage of his developing confidence to develop an intimate connection with him. Jonas, on the other hand, has no awareness that Helena is hatching a fatal plot. The newbie has a concealed purpose, and she’s trying to make sure everybody is where she needs them to be when the plot is revealed, much to everyone’s dismay.

You might also love: Ozark season 4 – Nobody Escapes This Place Unscathed

Soo many things to focus on

Overall, Black Island is perplexing for large portions of the film. You have to wait a very long time to understand exactly how things function together. You gain a better feel of what’s happening as they progressively peel away the layers. As the trappings of the narrative slip away, it becomes clear that this is a plain and uncomplicated film. There is a murder in the library, which gets solved far too easily and accurately. I’m confident that all of the viewers will grasp immediately what’s happening here. I also desired there to be something else entirely for the sake of my curiosities.

To be truthful, it is a little frightening, and it also involves some brainwashing. It’s nasty and uncool for teachers to engage in intimate relationships with young students. However, there is always an undercurrent sensation of paranormal fear that we are not fully informed about. By the time Black Island approaches its last 30 minutes, it has devolved into a formulaic thriller which neither thrills nor scares. Finally, once the story reveals the truth, the brainwashing takes on an entirely new degree of distaste.

The film begins by giving us the idea that something otherworldly is going on, what with the wild dog attacking Jonas’ grandma and so on. However, there is absolutely nothing paranormal here, and I’m not sure why the producers thought changing the tone was essential.

However, Black Island appears to be extremely stunning. As one would expect from Netflix, the execution quality is excellent, reflected in the film’s visual appearance. It’s lovely, and there is a balance between the brightness and colours of the frames The island is a cast member, or at least that’s how much we can determine from the available facts. It’s just as significant as the main character or a supporting character.

Despite in the case of most Hollywood movies, this one uses numerous sites on a genuine island to shoot Black Island. The majority of European films are based on an imaginary nation. That includes no trips to the Bahamas for a design staged north of Germany’s mainland. Rather than placing the drama in a modern suburban environment, the director and writer chose to stage it on an island.

Perhaps it was to show how confined life can become when people don’t trust each other by a certain nature. If you want a setting to be lively and speak in a film, the scouting and selecting procedure must be precise. To capture both the coldness and the island lifestyle, the creative crew travelled north and discovered the ideal location, Amrum, close to the Danish border.

Jonas’ residence is a private dwelling, returning to the Black Island filming sites, whereas the beach throughout the trailer’s opening credits is located east of the Nebel municipality centre. Amrum is the location of the shoot, and it took over a month to complete.

Black Island: See it or skip it?

Black Island begins with a promise and is perplexing enough to keep you wondering for the most part. However, soon enough, things begin to follow the tried-and-true path, resulting in disappointment. It’s not really the worst film that’s been made ever made. However, don’t expect too much from it too. The acting is good, and Alice Dwyer is intriguing enough to maintain the illusion. Philip Froissant, who plays the perplexed Jonas, is also excellent and convincing. Finally, the film is a once-in-a-lifetime adventure with incredible scenic value and production expenses. Definitely a dinner-time viewing!

Trending today: Best Action movies on Netflix that will blow your mind