Beckett: The Thriller That Made Us Love David Washington 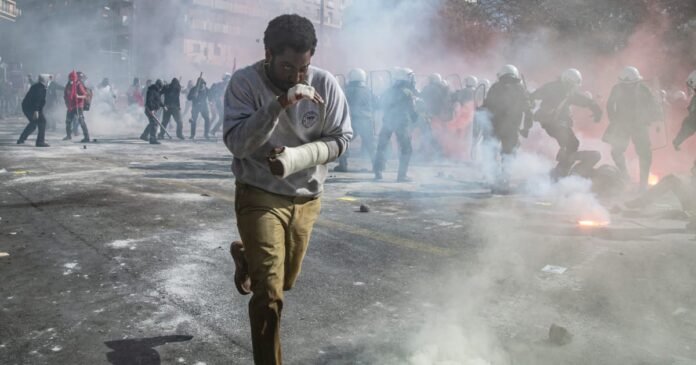 Netflix is investing heavily in low-budget thrillers and action films. This hunting production set in Greece premiered at the Locarno Film Festival before its release on Netflix. Of course, it helps to see Washington as a new type of character. Not your typical Hollywood hero, but a regular person swept up in a deadly operation.

When the protesters stir up the Greek capital over the government’s newest session of austerity measures, A couple of very good looking but otherwise standard tourists named Beckett (John David Washington) and April (Alicia Vikander) consider diverging from their travel plans and leave Athens for the countryside.

After a full day of roaming around ancient ruins and sharing the gloomy conversation, the characters are on the verge of tragedy; they travel to a distant inn. They decide to avoid the main towns due to ongoing political instability and instead take a trip through the countryside, only with a disaster.

There’s odd information regarding Greek mythology (the Oracle of Zeus). Next, the couple observes others and makes up a background for why they’re on vacation. Lastly, several locals warn them about an upcoming extreme demonstration that would clog the public area while advising them to stay in a separate hotel.

As they holiday in Greece, we watch John David Washington’s main character & his girlfriend April, who plays a meaningless and brief supporting role. A decrepit home, which Officer Xenakis (Panos Koronis), the policeman who questions Beckett at a local hospital, informs him has been uninhabited for years, breaks the vehicle’s fall.

However, while Beckett woke up after the accident, he sees a lady hustling a teenage boy out of sight. The next day, Beckett goes to the crash scene and is fired at for unclear reasons, causing him to flee.

You might also love: Tenet Ending Explained | All your questions answered

Rice seems to take measures to make clear we understand Beckett isn’t an action hero. With Washington getting shot, hit, and injured every time he tackles his antagonists. Beckett devotes most of his time confused and attempting to stay alive, even in the middle of widespread protests.

He has no clue why they’re following him initially can barely keep one step forward of them. The screenplay takes its time to disclose its full hand, which adds to the mystery and tension even though the language is probably Beckett’s worst element.

While it isn’t a flashy job by any means, it is more proof that Washington is especially suitable to be a diverse character actor. Aptly skilled at executing a range of different characters in any genre. Washington alternates between three main settings: broken sadness, frightened terror, and steely resolve, although none has any individuality.

Beckett is a master at jumping from ledges, rolling down mountains, racing for his life. Tricking his skilled murderers and being stalked by a fractured arm in a sling or many pistols and knife injuries. But, unfortunately, Beckett appears too trusting of individuals he encounters throughout the film, and it’s only because spectators have been programmed to believe that anybody may betray him.

The art of simplicity

The plot is simply someone attempts to kill him, he narrowly escapes. It takes away another layer of the mystery. Yet, it fits in the context of the film. It’s a simple opening act that sets the tone for the whole narrative. Paving the way for a fast-paced search that lacks depth but delivers numerous jolts of genuine suspense and adrenaline.

Our adventurous protagonist constructs fragile connections and meets uneasy friendships as the world draws in around him. Still, they often don’t stay much longer until he ends up in a terrible battle for his survival. Rolling down a mountain, getting stuffed into another trunk of a car, leaping out of a high rise building. But, of course, that’s also due to the hazy political landscape. Turmoil sparked by austerity measures characterizes it. Engulfing the severely troubled country and widespread corruption.

He has developed from a man we can connect with to a person we appreciate by the conclusion, ending in a foot chase across utter chaos streets (impressively staged in Athens) and a death-defying dive that would look utterly out of place for him at the start of the narrative.

The first ten minutes or so of Beckett’s play include several odd situations and speech exchanges. However, that feels like they will hint at the larger Greek plot that emerges. Beckett is the second film of the summer, following Hitman’s Wife’s Bodyguard, to utilize Greece’s geopolitical environment as a background.

Still, it doesn’t play a large role in Filomarino’s movie until the final chapter because all pieces begin to fit. Considering the plot’s length, this is a rather unexciting thriller that conveys urgency in the protagonist’s life-or-death dilemma. According to estimates, the cast includes 17 nationalities. Furthermore, an accomplished multinational team, all commanded by an Italian director who delivers a lost film in translation. This vacation to Greece is at the very least attractive as a diversion from Covid’s problems.

Beckett: See it or skip it?

An assassination, a confrontation involving Beckett and his attackers in a labyrinthine car park. And the typical revelation of Americans with sticky hands in other people’s political affairs play out all across the Athens city block jammed by demonstrators.

Unfortunately, Beckett is not a stereotypical rapid action film with long shots. Still, it’s an extremely effective little thriller that can cater to both the Netflix crowd derived in by star power and diehards looking for a contemporary genre film that just doesn’t rely solely on fight camerawork and art direction compensate for a lackluster narrative. Despite all of this, Beckett manages to conclude on an ominous note of hollowness.