Arthdal Chronicles: Is it the Kdrama’s GOT? 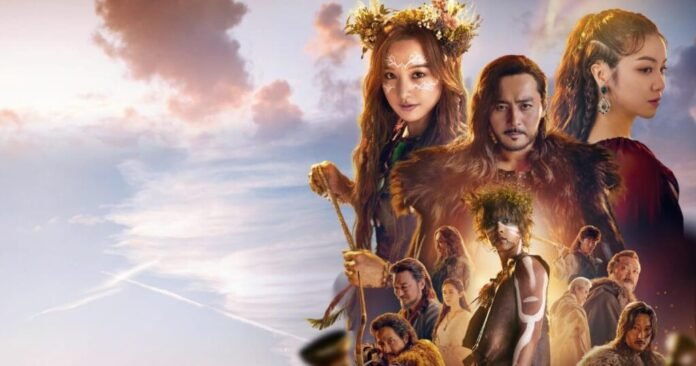 Imagine living in contentment in your tribe, not knowing what is beyond the vast cliffs’ physical barrier. Think about the situation wherein foreign conquerors burn your home down and enslave you and your people. Imagine you are a young priestess who is kidnapped, and imagine not saving the priestess from getting kidnapped. Arthdal Chronicles has all of this going on and so much more! This is the foundation for the series relationships.

KDramas are meant to be short, pleasant, and experienced in one sitting; whether excellent or poor, they finish the story in a particular handful of episodes, and that’s about it. The Arthadal Chronicles takes place during or before the fictitious Medieval Period. It is a three-part drama consisting of Eighteen episodes about a kingdom that oppresses and overpowers various tribes for low wages and unification. How Culture, Society, and Humanity Development arose and ruled between many of the most potent Clans of the time. Politics and schemes claw their way to the Union of Clans’ Leadership. The tale progresses from the first capture to the verge of transformation throughout each six-episode segment of the drama. This story-line is full of different ethnic groups, religious convictions, prejudice, and mysteries.

What are the two tribes/races in the Arthdal Chronicles?

The Params (people) and the Neanderthals are two races/species introduced in the fictitious continent of Arth. Firstly, Sarams, who bleed red, are more intelligent and speak Korean but seem to be not as physically mature as Neanderthals. And on the other hand, we have Neanthals (derived from neanderthal), who bleed blue, hold different views and are more robust, faster, and have better night vision than Params.

The writers and editors had also insisted from the beginning that the Wahan Tribe knew the same dialect as the inhabitants of Arthdal; the idea that this eventually made perfect sense in consideration of the identities of the Great White Wolf and Asa Sin was incredible.

Some people believe that the storyline is flat and predictable, hence boring. To it I say, Wrong! I was blown away by how intricate the plot was, and I hardly see it as flat, predictable, or uninteresting, as others have said. Every episode is equally fast-paced, with the ball of authority changing hands so frequently that it finds itself in an unexpected location right at the start. Alliances form and fall almost simultaneously, and connections sustain only at the exchange of something valuable.

The issue I struggle with the most in medieval drama is understanding the setting and mythology. I do not like being perplexed and waiting for numerous episodes to sort things out. Thankfully, Arthdal Chronicles doesn’t take that long to set up and start.

Arthdal Chronicles boasted a big budget that allowed for fantastic cinematography and unique sets that created the magical world of Arthdal. It is fun to see the new and fresh perspective on the costumes, styling, and groups, and production.

Similar read: Crash Landing On You: Adorable cast, A review

What are the main themes of Arthdal Chronicles? The central theme is about human desire. The desire to establish identities and alliances with people with similar origins, ideologies, physical characteristics, weaknesses, abilities, and habits. However, once we have become a community of like-minded people, we still break down into smaller communities and groups. We are eventually turning against one another due to differences in experiences, ideas, and values.

A spin on gender dynamics

Aside from the societal criticism of colonialism, I love the concept that authority passes through the tribe’s mothers. It takes a spin on everything we know and believe about gender dynamics. Men almost always are shown to be the strongest, fastest, and most potent is just a social construct. Arthdal Chronicles shows its female protagonists to be among the toughest, even if she wasn’t the strongest. This isn’t revelatory, but it demonstrates that physical strength isn’t everything. Those with mental smartness can wield real strength.

Tanya isn’t the only woman who pays no attention to patriarchy; Taealha is as well. She’s vicious and in love, and the play demonstrates that a woman in love may be just as powerful and intelligent as any other woman. She need not turn into a loser. Taealha’s guardian is a formidable woman who is swift on her feet and lethal with her sword. Another central theme running in the show is the need for validation and words of affirmations in order to function positively. The extent to which humans want assurance and authority is immeasurable. Tagon (Jang Dong-Gun) and Eunseom (Song Joong Ki), the two central protagonists, constantly work and move to get acknowledgment and appreciation from their communities and tribes, respectively. Through their journey, we witness how they function to overcome their own difficulties and shortcomings, how it changes them, and what they do with the situations that arise in front of them throughout the season.

You might also love: The chilling adventures of ‘The Call’ | Kdrama review | Ending explained

The series came to a close on a cliffhanger. I didn’t notice this until I saw the last installment, and it made viewing this episode a little tricky as I counted down the minutes as events didn’t move as quickly even though they should have. If there is a second season, the core cast must return. Otherwise, the series will not look complete. It is uncertain if an Arthdal Chronicles Season 2 is coming, but we can hope, right?

The first season of Arthdal Chronicles is adventurous in terms of writing and directing, visual effects, and production, attempting to go where no Korean drama has gone before. They also have a fantastic ensemble of performers capable of expressing their characters’ multiple depths and complexity. The series has great cinematography and composition. However, owing to how strange this sort of narrative is from the viewpoint of a Korean drama, it will take some work to get up-to-speed with the plot. However, after you get over the unfamiliarity, you’ll begin to grasp the universe in which the characters live.

Will there be a second season?

The show does not let its audience down. It’s incredible to see old action and drama, as well as some romance. To give the presentation an excellent finish, all of the pieces mix nicely. The cast is fantastic, and they do an excellent job of bringing all of the characters to life. On February 2nd, 2020, Arthdal Chronicles got the green light for a second season. Unfortunately, owing to the epidemic, the show is yet to begin production. As a result, no related release date has been announced, yet.

In the upcoming season, the original protagonists will return. There are no more details about the second season available at this time. You will have to wait a bit longer for their favorite program to return before you can enjoy more K-drama. If you haven’t seen the show yet, you should do so before the second season of the Arthdal Chronicles is released.