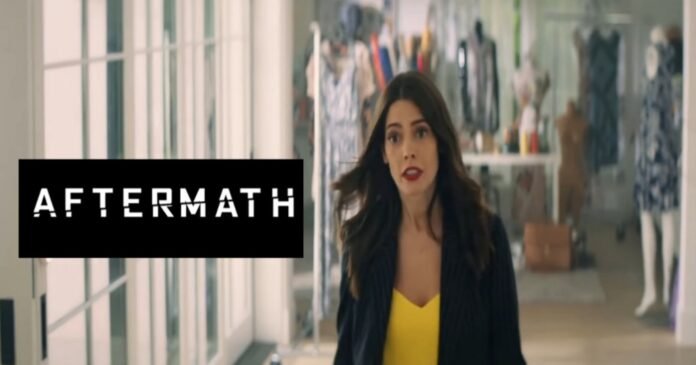 Let us get one thing straight if a movie (especially horror) starts with ‘inspired by true events; there is no way it is. This way of starting a movie is always suspicious, rather pretentious because they are frequently employed as a marketing ploy to grab the audience’s interest when the storyline is not entirely accurate.
And guess what! Aftermath begins with this title card, but let’s wait to jump to conclusions. A 911 call and a murder set the tone for the movie. We wait as the titles roll, trying to figure out what appears to be a murder-suicide, replete with a bloody blown-up skull. The opening sequence, if nothing else, promises violence and guts. Is it effective in peaking the interests?

Natalie and Kevin’s (Greene and Ashmore) marriage is in turmoil. She had an affair (Classic turmoil trope?), and their marriage counsellor advises them to start over. The movie follows this young couple who are trying to repair their relationship. Unfortunately, they come across an incredible offer on the house with a shady past. Kevin comes up with a brilliant plan and chooses to move into that house of horrors. They accept the offer, believing that the new place will provide them with a new beginning, but they immediately discover that their problems are really just beginning.

How do they find the house?

They only knew about the house because Kevin works as a crime-scene cleaner and had just finished cleaning there following a brutal murder-suicide, including the former residents. It doesn’t look like a decent start to a new life. Run, guys, run!

And it soon becomes clear once Natalie and Kevin move in. Strange things begin to happen almost quickly, such as their dog Odi howling at an empty wardrobe and items vanishing and popping up in odd places, in traditional haunted house clichés.

Editor’s pick: Blood Red Sky: A blood-sucking mother on her way to save her child

The movie is a victim of some horror genre-specific tropes. However, the film has an oddly satisfying production value. My advice? Do not go in expecting the greatest horror film of the century, and you will be fine. Whenever anything frightening happens, ominous music is played. Things emerge and go, the thermostat of the house fluctuates, and cryptic notes are left throughout. Even though this is just a small portion of the movie’s narrative, the underlying mystery of the haunted home storyline works effectively.

Also, I never anticipated the spooky parts of this film to work as well as they did. You might figure out some of the plot points about half the way in, but it doesn’t detract from the enjoyment of the film. That isn’t the worst I’ve ever seen, but it’s not something new either. However, it does a good job of building up the tension. Basically, it implies you’ve seen a multitude of films and have a good idea of what may happen in these types of horror thrillers.

Is the end predictable?

By the majority, Aftermath is a Netflix film with numerous narrative twists and hints scattered throughout the film. I’m not sure if this is a haunted home or if it’s just a weird individual. Whenever you feel you’ve figured out one issue, another factor takes centre stage. Once it is time for the facts to be revealed, it’s a mix of amusing and terrifying. The surprise is plausible, if outlandish, but the tension is good enough to keep you curious as a one-time viewing.

You might also love:10 Amazing Rom Com Movies on Netflix You Must Watch [2021]

New and old talents made it what it is

Peter Winther is the maker of Aftermath, as well as the story’s creator. Although his prior films have a poor IMDb rating, Peter Winther hasn’t made a feature picture before. Lars. P. Winther, who has collaborated on some of the most well-known films in recent times, is a producer of this film. The next Suicide Squad (2021), The Hunt (2020), and a slew of Avengers films are among them. Dakota Gorman wrote the screenplay and is accountable for the film’s excellent dialogue. When the plot appears to be heading down a clichéd route, the conversation is exactly what shakes things up.

Is Otto dead in the end?

Natalie escapes by severing her own wrist, then Natalie and Kevin finally gang up and kill Otto. After all that has transpired, they have decided to leave the house. The closet door gently closes as we witness them walkout one month later in the movie’s closing shot. This hints that either Otto isn’t as dead (as they believe) or someone else has quietly moved in (Good luck, new residents, you will hate it). This also leaves and hints at a sequel possible in the future. But, do we really need it?

You might also love: Scream 5 – Yell Out Loud, a Killer is awaiting you at the backdoor

Aftermath, a Netflix horror-thriller, is a remarkably good watch. From the plot’s intrigue to the horrific horror scenes. It’s a little too lengthy, but the language is genuine, and has a well-crafted plot is well-crafted. You’ll definitely pick it up faster if you’ve seen movies involving paranormal activity, house invasions, and other psychological games related storylines. When it pertains to characterization, the two protagonists of Aftermath immediately caught my eye. Natalie and Kevin, with their imperfections and all, are appealing characters. Ashley Greene and Shawn Ashmore are fantastic actors who bring their roles to life. It’s a film that you can see and enjoy with a few family pals without having to think too hard about it, and it succeeds admirably at that.