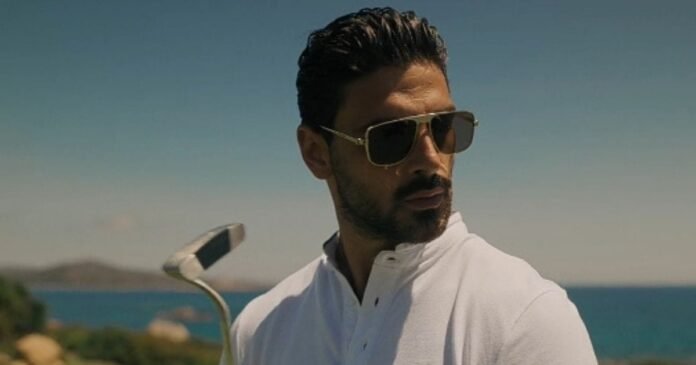 How often do you love to watch sexually arousing content?

Well, depends from person to person, I guess!

The audience loves to watch the cinema with family and friends, but when it turns into something really hot and spicy they prefer watching it alone. Eroticism tops this list! The desire to express love in a very explicit manner is what many of us likes to see. 356 days-this day, is one such art that showcases anger turning into salaciousness.

Giving a fair decision, Movque.com is here to give its opinion about 365 days-this day. Hold on tight we would be pacing up to give you an honest review about this wonderful titillating film which carries the life of two different personalities, struggling to get fit into each other’s zone.

The movie opens its curtain by showing Laura and Massimo are getting married and are living happily as a newly wedded couple. Sooner they plan to go out on a honeymoon to enjoy their private times. On returning back, Massimo starts following his daily routine like ever before, leaving Laura behind. She is frustrated and has nothing to do except be Massimo’s wife, which according to her is pretty boring. In order to lift up her mood, she spends a day out with her best friend, Olga.

A few days passed, and she meets the gardener, Nacho, and shares a little conversation. Despite knowing that Laura is mad at him, Massimo takes her to the party and gets physically involved with another girl. Laura watches this and asks Nacho to take her out of there. Nacho takes Laura to his place and they live together for a few days before finding that something is fishy! Nacho is the son of a rivalry and Massimo hates him for obvious reasons! And that’s when the game of kill and survive starts!!

The character of Massimo justifies his role in the movie where he portrays himself as a Sicilian Mafia Boss. The language, style, and attitude it carries make Massimo a tough and powerful man to maintain the aura he has created in the first movie. Taking about his outfits, the color themes of his clothes, specifically black, has given him a new appearance to be more royal and classy. Dialogue writing is perfect and matches with the expressions Massimo delivers. At times you can find him a bit arrogant and short-tempered which converts into lust at the end of the day. Overall the personality he stands with is dynamic and sexy at the same time. Well, I guess that’s what the character demanded!

Similar read: #10 Movies that will take you in the world of Friends With Benefits

Laura is one of her kind who works as a sales director of a clothing brand and travels to Italy regarding the same. She is sophisticated, charming, and full of life before getting kidnapped in the previous version of this movie. On the other hand, the character flows with time, making her a good and responsible wife of Massimo. The only thing she is unable to gulp down is to do nothing, i.e. she is a very determined kind of a lady who speaks softly but can thrash you apart if in anger. She wants to live up to her desires but couldn’t, rather follow the instructions from her husband.

You can find the emptiness in her eyes despite how great Massimo is with her. The color theme for her outfits is mostly pastel, depicting her as elegant, stylish, and upscale. No wonder she is beautiful and knows how to carry herself in front of others. Not sure about Massimo, but you will fall in love with her all over again!

Talking about the music and tracks, the movie is acing in it! Beautiful song compositions with soothing chords and rhythms will make you fall for them again and again. One minute you’ll start grooving on some great party songs while another minute you’ll find yourself listening to some melodious creations. Singing has been perfect using different textures and dynamics. Sitting down on your balcony or porch on a breezing night will be the best combination with these kinds of songs. Here is the list of some amazing songs that I loved from this movie:

365 Days has been a blockbuster in the entire world. People loved it and the way it was executed was marvelous. If we talk about ‘365 Days – This Day’ has been a bit off regarding its climax. On the first hand, I was unable to understand that when Laura is been killed in an accident at the end of the first movie, how come she is seen marrying Massimo in the starting plot of this one? Her survival could’ve been cleared in a few initial scenes. In my opinion, the climax should have been more powerful extending the character of Massimo’s twin brother, the revenge for Laura’s death, survival of Massimo’s emperorship, an afterlife of Nacho, and many other unfinished businesses. This could have brought the movie in limelight!

That’s all from my end, friends. Hope you liked the review and all the details I shared about the movie. Watch the movie and comment your thoughts below about this one and also let us know, which particular scene you loved the most and how the characters were according to you?
Last but not the least; don’t forget to follow Movque for such outstanding content!

13 Movies that will Obligate you to Rewatch Edge of Tomorrow

13 Movies that will Obligate you to Rewatch Edge of Tomorrow